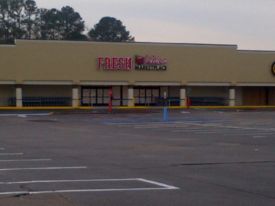 Fresh Value Marketplace is a Thomasville-based chain of grocery stores owned by Triple N Foods, with one store in the Birmingham District, in Trussville.

The Trussville store, was opened December 6, 2013 in a 23,000-square-foot portion of a former Food World at 309 Main Street in the Village at Trussville shopping center. The store uses a "cost-plus-10" model where merchandise is priced at ten percent over the product's cost. Fresh Value also does not carry alcohol or tobacco products.

The Trussville City Council in August 2013 approved $1.7 million in incentives to bring the grocer and a 24e Fitness gym to the property, with $800,000 in tax abatements for Triple N. The city has been paying $21,000 monthly rent on the space, after it bought out America's Thrift Stores lease for $250,000 to keep the thrift store from opening in the space in October 2011. The site is also the subject of a lawsuit brought forth by the owners of nearby Anytime Fitness and local residents.