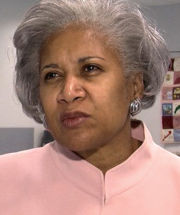 Ruth Gayle Cunningham (born c. 1950) was the executive director of the Jefferson County Committee for Economic Opportunity from 1990 to 2013. She also headed the JCCEO's Head Start program from 1986 to 2004.

Cunningham was raised in Jackson, Mississippi. She earned her bachelor's degree in American History at Connecticut College in New London and a master’s degree in early childhood education and administration from Bank Street College of Education in New York. She studied traditional craft education in Ghana on a Fulbright fellowship

Before coming to Birmingham, Cunningham was an assistant professor at Delgado Community College in New Orleans, Louisiana and coordinated their early childhood associate degree program.

Cunningham has served on the Governor Bob Riley's Pre-K Council, the Alabama State Children's Policy Council, the Head Start Advisory Panel on Research and Evaluation, the Head Start Quality Research Center Consortium, and the Center on the Social and Emotional Foundations for Early Learning. She was a member of the HHS Advisory Committee on Services for Families with Infants and Toddlers which recommended the creation of Early Head Start. She also chaired the National Association for the Education of Young Children Commission on Early Childhood Standards and Criteria and was treasurer for the NAEYC’s Board of Directors. In 2010, Cunningham was given the Sargent Shriver Award for Excellence by the National Head Start Association at their meeting in Washington D.C.

Cunningham resigned from the JCCEO in March 2013 and was succeeded by Marquita Davis.

Cunningham has also served on the boards of Children's Hospital of Alabama, Eastern Health Services, Housing Enterprise of Central Alabama, the Birmingham Museum of Art and the Legal Aid Society.

Cunningham is an avid traveler and collector, with a significant collection of African and African-American artwork and literature. She has one daughter, Kelli Caulfield.

In 2013 Cunningham and her daughter pleaded guilty to funneling nearly $500,000 from JCCEO's "Housing Revitalization Program" between November 2008 and December 2010 to pay for mortgages, property taxes, repairs and renovations of personal property. Cunningham was sentenced to two years in prison.