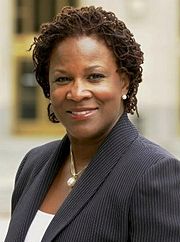 Gaynell Hendricks (born May 9, 1951) is the tax assessor for Jefferson County. She is also the founder and director of Wee Care Academy day-care centers, chair of the Birmingham Airport Authority, and active on several cultural and economic development boards in Birmingham.

Hendricks graduated from Booker T. Washington High School in Memphis. She has a Bachelor's degree in Sociology from LeMoyne-Owen College in Memphis, a Master's in rehabilitation counseling from Memphis State University, and an M.B.A. in marketing from Rutgers. She is married to former city councilor Elias Hendricks, who owns the Transportation Building downtown.

After moving to Birmingham with her husband, she left her management-trainee position at Metropolitan Insurance Company to launch her successful day care business in 1988 with $15,000 of their personal savings. They opened the first location in the former Thomas Furnace School. The business has grown to 13 centers which she manages along with her oldest daughter, Daagye Hendricks-Harville. Her twins, Shia and Elias Jr, born in 1987, both attended Wee Care. Her grandson, Noah, is currently enrolled.

In addition to her work with the Birmingham Airport Authority, Hendricks sits on the boards of the Federation of Childcare Centers of Alabama, the Birmingham Zoo. the Birmingham Music Club. the YMCA, the Alys Stephens Center, Space One Eleven, the Altamont School, and the Women's Fund of Greater Birmingham, as well as the Alabama Shakespeare Festival in Montgomery.

As a successful minority businesswoman, Hendricks has won several entrepreneurial honors and awards, including the National Black MBA Association's "Entrepreneur of the Year", the United Negro College Fund's 2002 "Small Business of the Year", and "Top 10 Women Business Leaders" as named by the Birmingham Business Journal. She was a member of the Leadership Birmingham class of 1998.

Hendricks is an avid collector of African art. She and her husband have a daughter, Daagye born in 1978 and twin boys, Elias III and Shia, born in 1988.

In the 2006 election, Hendricks campaigned to represent District 54 in the Alabama House of Representatives. She was endorsed in the race by the Alabama Police Benevolent Association. In the primary, Hendricks garnered 28.65% of the vote, forcing a runoff with Patricia Todd. The result of the runoff was an apparent win for Todd with a narrow margin of only 59 votes of the 2,287 cast.

After a week of studying the results, Hendrick's mother-in-law, Mattie Childress, filed her contest with the state Democratic Party, alleging improper ballot-handling procedures and noting Todd's filing of financial information after the runoff showing a large and potentially controversial deposit from the Gay & Lesbian Victory Fund and payments to Kamau Afrika and Charlie Williams Jr, who endorsed Todd in the runoff. After a hearing in Montgomery, party leaders dismissed the challenge and certified the primary results.

In the 2008 election Hendricks was elected Jefferson County Tax Assessor. She took charge of the department on October 1, 2009. She hopes to give taxpayers the option of spreading their payments throughout the year and to provide more reliable notice about past due obligations, especially to senior citizens.