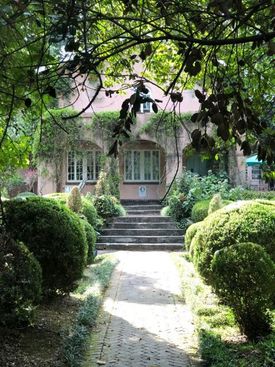 The Georges & Eleanor Bridges residence is a pink-colored stucco house located at the center of a 2-acre lot at 214 Edgewood Boulevard, bordering Roseland Drive in Homewood's Edgewood community. It was constructed in 1921 for sculptor Georges Bridges and his wife, the former Eleanor Massey. The couple designed the house themselves and Georges built the carved wooden entrance doors.

In October 2019 O'Sullivan sold the property for $2.2 million to Scott and Holley Ellis, who planned to occupy and restore the house. In September 2020 the Ellises accepted a $2.3 million offer from Clayton and Rachel Mobley. The Mobleys' application for a zoning variance for an addition and swimming pool was denied by the Homewood Board of Zoning Adjustment in June 2021. In November 2021 the Mobleys took out a building permit for a $2.6 million addition.