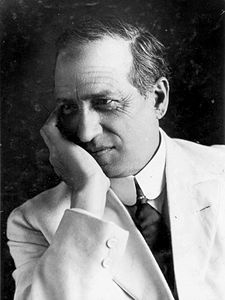 Giuseppe Moretti (born February 3, 1857 in Siena, Tuscany; died February 1935 in San Remo, Italy) was a sculptor who became well-known in America for his public monuments. Most notable among his works are Vulcan, the largest cast-iron statue ever made, which was cast for the 1904 World's Fair.

Giuseppe Moretti was born in Siena, then part of the Grand Duchy of Tuscany, in 1857. He was the nephew of Vincenzo Cardinal Moretti, a noted patron of art. He began studying marble sculpting at the age of nine with the monks of San Domenico and with sculptor Tito Serrochi, whose studio was in the cloister of the church in Siena.

Moretti's precocious nature is emphasized in an anecdote about his early fascination with becoming an artist. Apparently aware that distant Florence was the nexus of Italian art, the young Moretti set off down the road in search of a career in the art world. An alert neighbor returned the would-be runaway, and soon after, Moretti was placed under the tutelage of Serrochi.

Moretti later studied at the Academy of Fine Arts in Florence, working in the studio of Giovanni Dupre.

Intrigued by the medium of marble, Moretti moved to Carrara to perfect his skill. In about 1879, a Dalmatian sculptor who saw his work was impressed and invited Moretti to assist him in his studio in Agram (now Zagreb), Croatia. Moretti set up shop there and made several important commissions before a large earthquake devastated the area in 1880.

Moretti decided to leave, and applied for permission to emigrate to the United States. In the meantime, he went to Vienna, Austria, where he worked on the Rothschild palace. He executed a marble bust of the Emperor Franz Josef that was later exhibited at the Paris Exposition of 1900, winning a bronze medal.

Moretti, now a widower, next took up residence in Budapest, Hungary, where he executed some works to commemorate the city's history. A dispute with German authorities over a marble field that Moretti wanted to use for his projects and as an incentive to local sculptors frustrated Moretti, and, in the summer of 1888 he emigrated to the United States.

Moretti arrived in New York City and opened a studio with fellow artist Carl Bitter. Soon, with the patronage of architect Richard Morris Hunt, Moretti was working on his first commission in America: Sculpture for the "Marble House" of William Kissam Vanderbilt in Newport, Rhode Island. On this project, Moretti produced the interior marble friezes and statuary, including bas-reliefs of Hunt and French architect Jules Hardouin Mansart, which stood side by side on a stair landing.

Edward Bigelowm director of public works for Pittsburgh, Pennsylvania, commissioned Moretti to produce a series of works for Schenley Park in 1885. Moretti immediately recognized the potential of Pittsburgh's rugged terrain for such a vast project. Arthur Arton Hamerschlag, the first president of the Carnegie Institute of Technology, also did much to popularize Moretti's work in Pittsburgh. When Bigelow failed to get reelected, Moretti's commission was discarded by the new city officers.

The first of many failed business ventures for Moretti was in 1897, when he and fellow Italian immigrant Riccardo Bertelli launched a small bronze foundry the December of that year with the help of a $20,000 loan from another Italian immigrant, Celestino Piva, who was a wealthy silk importer. However, in two years the company had collapsed and Pivo withdrew support. Yet Bertelli bought out Moretti's share, reorganized the business, and renamed it "Roman Bronze Works." By 1900 the foundry had relocated from Manhattan to Brooklyn, secured the financial backing of Piva once again, and acquired the exclusive casting rights to the works of American sculptor Frederic Remington.

Meanwhile, Moretti was pursuing a career in business by purchasing marble quarries. He was most interested in the white marble of Sylacauga, proclaiming it superior to the well-known product of Carrera. He became a pioneer in the Alabama marble industry beginning in 1901, but was largely unable to achieve the kind of development in the quarrying industry that would bring profit. Also an amateur operatic singer, Moretti joined the Liederkranz Club and befriended Enrico Caruso. 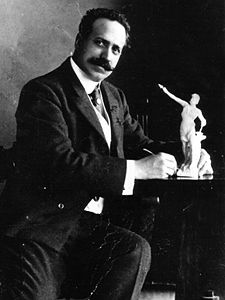 Moretti with his clay model for Vulcan

Despite his business failings, Moretti retained his reputation as an artist, and soon won his most famous commission from James A. MacKnight, secretary of Birmingham Commercial Club. Moretti agreed to charge only $6,000 for the massive plaster model of Vulcan, which was to be Birmingham's contribution to the St Louis Exposition.

Moretti created the sculpture in plaster in New Jersey, then accompanied it to Alabama to oversee its casting in iron in 1904. No one was waiting to greet him when he arrived at the Union Depot on February 18, but he found his way to the offices of the Commercial Club of Birmingham in the First National Bank building. He brought two assistants and a personal chef. Moretti resided in an apartment while he made repairs to the statue's plaster head and supervised the modifications made by the foundrymen to facilitate the statue's execution. The Age-Herald reported on the activities of the city's esteemed foreign visitor, noting that, "He is a very temperate man, rarely drinking anything stronger than the native Chianti, which might be said to comprise his principal article of diet."

Once the castings were made, Moretti accompanied them to St Louis where "Vulcan" was assembled as the towering centerpiece of the star of the Palace of Mines and Metallurgy.

Meanwhile, in 1905, Moretti married Dorothea Long in Brookline, Massachusetts. Having surveyed rich marble deposits near Sylacauga with local industrialist John Henry Adams, Moretti made it a personal goal to instate proper quarrying procedures for the material. He formed a partnership with Henry Atkinson and P. S. Arkwright of the Atlanta, Birmingham, and Atlantic Railroad to fund the development. 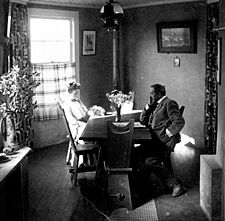 The Morettis at home in Sylacauga c. 1904-10. courtesy BPL Archives

Moretti closed his New York studio and brought his wife to Sylacauga, where he established a home and studio near the quarries. Dorothea kept Moretti's correspondence and account books for him. He promoted the Alabama stone with samples of thin slabs and carved reliefs, hoping to claim a significant portion of the $5 million being spent each year in the US to import Italian marble.

He also brought other sculptors to Alabama to see the quarries and work with the stone. In 1907 the sculptor hired an apprentice, Geneva Mercer, then a student at the Alabama Normal School in Livingston. Moretti had seen her work displayed with other student sculptures at a Commercial Club exhibit put on by Julia Tutwiler.

In 1909 the Atlanta, Birmingham, and Atlantic went bankrupt and the nascent quarrying venture ended abruptly. Moretti resumed sculpting full time and, with his wife and Miss Mercer in tow, traveled wherever work was available. They worked in New York and in Florence, Italay. In Havana, Cuba they completed a series of monumental sculptures for the facade of the Gran Teatro de la Habana. He eventually established a more permanent studio and residence on Bigelow Boulevard in Pittsburgh.

The post-World War I demand for large memorials became a major source of income for Moretti's studio. He completed sculptures and tablets for Ohio, Pennsylvania, and elsewhere. Moretti is known to have remarked that "... art, in its various meanings is to be benefited greatly by the sentiment that the world war had reawakened..." Moretti also believed that Pittsburgh would become the "Athens of the New World," spurred on by artistic creation. "No," declared Moretti, "I shall not leave Pittsburgh - it is the fine home for the artist - strong, mighty, rugged-so!" 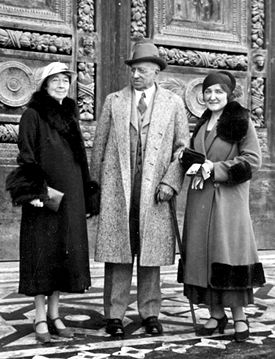 Moretti with his wife and Mercer, c. 1930-35 courtesy BPL Archives

In 1923, when he finally left Pittsburgh, Moretti returned to Talladega County and bought a small marble quarry, erecting another two-story house nearby. The venture, which suffered from inexperienced labor, failed in 1925. With few prospects remaining in America, the sculptor decided to return to Italy with his wife and assistant in 1930.

The three of them lived in a large villa and studio in San Remo. The availability of skilled artisans who worked for relatively low wages made it possible to increase output despite the sculptor's failing health. They completed commissions for Atlanta, Georgia; Nashville, Tennessee, and the National Cash Register Company in Dayton, Ohio. As prostate cancer forced him to reduce his activities, he took to working on smaller pieces and writing poetry. He died in February 1935 and was buried in San Remo.

Moretti's most important works in Alabama, other than Vulcan, include the Mary Cahalan statue in Linn Park, the Patrick O'Reilly statue at St Vincent's Hospital, and the work most prized by Moretti himself, Head of Christ. Moretti said of that carving, "I selected the marble myself with infinite care, the very first piece from the Sylacauga quarries ever to be used for an artistic purpose." He also told his friend, Alice Jeffress Boswell, "I have a peculiar affection for it. Where I go, my Christ goes also.... I feel that the final resting place of this first sculpture from Alabama marble should be in that state."

Other locally-held works include the baptismal font at 1st Presbyterian Church of Birmingham, the William Elias B. Davis statue at Hillman Hospital, and a small marble bas-relief he gave to James MacKnight in 1904 (donated to Vulcan Park in 2011)

Moretti's notable work in Pittsburgh includes the Highland Avenue and Stanton Avenue entrances to Highland Park, executed in granite with bronze groups and figures; the four marble panthers erected on Panther Hollow Bridge; and the Stephen Collins Foster Memorial, which includes a rendering of "Old Black Joe" playing the banjo at the feet of the composer.

In 2006, Jay Taylor wrote a parody of The Da Vinci Code called The Moretti Code in which he substituted Moretti for Da Vinci.

In 2008, the Sheraton Birmingham Hotel opened Moretti's, a lobby cocktail lounge featuring enlarged historical photographs of Moretti and his work, as well as four original sculptures on loan from the Birmingham Museum of Art.