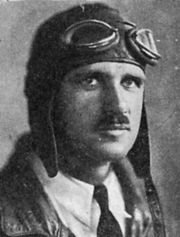 Glenn Edmund Messer (born July 12, 1895 in Henry County, Iowa; died June 13, 1995 in Birmingham) was an aviation pioneer, responsible for major advances in the use and modification of existing aircraft and in the design and construction of aircraft and aircraft instruments.

Messer began his flying career by taking lessons on a Wright biplane from aviator George Gustafson in Bay City, Michigan. Along the way Messer started a flying circus, built an airfield in Birmingham, designed and built his own aircraft, and operated an aircraft instrument shop in Woodlawn. During his time stunt flying, Messer is reported to have been the first man to change from one plane to another in flight, among other things.

Theirs was one of the first teams to transfer a "beautiful young girl" from one plane to another while both were flying a mile above ground. Vernon found a barn in Iowa with a long runway from front to back where they could practice the stunt. They rigged a trapeze from the roof, in the middle of the runway, so that when Messer hung by his knees from it, his hands would be at the same height as Phoebe's when she stood on the seat of a buggy on the ground. After Phoebe and Messer became comfortable with the necessary handclasps and movements required for her to transfer safely from the buggy seat to the trapeze, Vernon attached horses to the buggy and slowly approached Messer, who was hanging from the trapeze. He gradually increased the speed of the buggy until Phoebe and Messer could make the change smoothly even when the horses were at a gallop.

Messer operated a flying field in Birmingham with his partner Edward Stinson which later became the Birmingham Municipal Airport. He maintained his interests in the airport for many years during which time he opened another airport, Messer Field. In 1926 he started the Southern Aircraft Corporation which designed and built a plane known as the "Air Boss." He eventually sold his interests at the Birmingham airport and became associated with an aerial mapping business. Known as The Glenn E. Messer Company of Birmingham, the company later operated a Certified Flying Instrument Service and carried a complete line of aircraft supplies at a location in Woodlawn. The highway from 5th Avenue North in downtown Birmingham to the airport was named Glenn E. Messer Airport Highway in his honor.