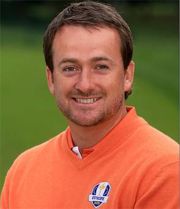 Graeme McDowell (born July 30, 1979 in Portrush, Northern Ireland) is a former member of UAB's golf team and a professional golfer on the European Tour. He won the 2010 U. S. Open at Pebble Beach, California.

Graeme is the second of three boys born to Ken and Marian McDowell of Portrush, north of Belfast. He began playing at local links courses at the age of seven, with his uncle, Samuel Loughrey, as coach and mentor. Former UAB golfer Chris Devlin recommended him to coach Alan Kaufman and he accepted a scholarship to UAB in 1998.

Already a great driver from the tee and a driven competitor, McDowell improved his putting in college to become a consistent overall golfer. He improved each year and, as a senior, won the Haskins Award for most outstanding collegiate golfer in the United States. In 2001 he played for the Great Britain and Ireland team in the Walker Cup, played at Sea Island, Georgia. He began playing professionally in 2002 and won the Volvo Scandinavian Masters tournament in his fourth start on the European Tour.

McDowell didn't win any tournaments in 2003, but won the rain-shortened 2004 Telecom Italia Open in a playoff and finished 6th overall in the European Tour Order of Merit. In 2005 he began splitting time between the European and PGA Tours. He finished twice in the top 10, including a tie for 2nd at the Bay Hill Invitational, giving him an exemption for the 2006 PGA Tour. He dropped out of the top 150 that year, though, and returned to the European Tour full time in 2007.

McDowell won the Ballantine's Championship and the Barclays Scottish Open in 2008, and joined the European team for the 2008 Ryder Cup. He finished the year ranked 5th in the Tour's Order of Merit. He didn't win any tournaments in 2009, but returned in 2010 to win the Celtic Manor Wales Open by three strokes and, later the same month, claimed a rare European victory in the United States Open, defeating Grégory Havret of France by 1 stroke.

In July 2013 McDowell won the French Open by 4 strokes.