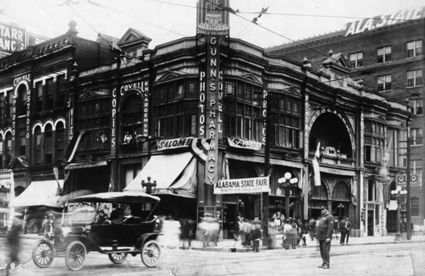 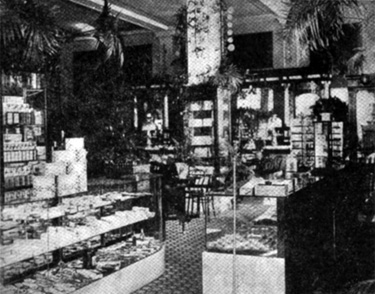 Gunn's Pharmacy, Inc. or Gunn Drug Company, was a large drug store and soda fountain located on the northwest corner of 19th Street and 3rd Avenue North. It was formed when William Gunn bought out Birmingham's Ellis Drug Company in 1895.

The original store, at 2017 2nd Avenue North, was damaged by fire in 1907, with losses amounting to $500. Gunn enlisted additional investors A. A. Gambill and Thomas Bowron as partners in 1908 and purchased the former Housman's / Parker's store in the Wright Building at 19th & 3rd. Gunn bought his partners out in 1909, but incorporated a Gunn Gambill Drug. Co. in 1910 and added a second location at the corner of 20th Street and 3rd Avenue.

The larger store remained Gunn's Pharmacy (the former Parker's) on 19th and 3rd, which it shared with Covell Photo Studio. That store, just south of the Hillman Hotel and across from Blach's, was 50 feet wide by 75 feet deep with lofty ceilings. The interior was decorated in pale buff and maroon and the exterior was bedecked with a towering corner sign, crowned with an illuminated picture of a fountain.

The store's soda fountain, of the "Innovation" type, extended across the entire end of the store, paralleled by a row of 26 tables, separated from the front of the store by showcases of the "silent salesman" type. The fountain was staffed by "three soda men and three or four boys," the latter helping during rush periods at lunch and after theaters let out. The boys routinely gathered up the menu cards before those rush periods, so as to hurry along those patrons who would feel compelled to peruse the entire menu at leisure before making a selection.

According to one account, scores of sandwiches and dozens of types of pie were offered daily. The same account went on, however, to explain that "a singular thing about the sandwiches of Birmingham is that so far as could be learned, they are all made by the same person, a woman who gets telephone orders at night and delivers the goods next morning through a corps of little boys. Only one kind is sold. It is a turkey sandwich with a pungent dressing somewhat resembling chili sauce, and is distinctly good…The sandwiches cost six cents delivered and sell at ten cents each."

In 1914 the Gunn Drug Company reported that it was moving into a new building being constructed by Leo Steiner at the corner of 20th Street and 4th Avenue North. It was reincorporated as the New Gunn Drug Co. in 1915 by William, two sons, J. McG. & C. G. Gunn, and John H. Miller.