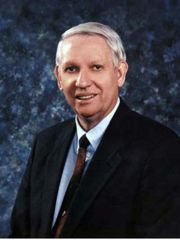 Harold Guy Hunt (born June 17, 1933 in Holly Pond, Cullman County - died January 30, 2009 in Birmingham) was a politician who served two terms as the Governor of Alabama from 1987 to 1993. He was the first Republican to serve as governor of the state since Reconstruction.

As a young man, Hunt was active in the Future Farmers of America, serving his local and county-wide chapters as president. He excelled in public speaking in school and was the salutatorian of his Holly Pond High School class of 1950. He married the former Helen Chambers on February 25, 1951.

After graduating he enlisted in the United States Army and served with the 101st Airborne Division and 1st Infantry Division in the Korean War. He returned to Alabama upon his discharge in 1956, where he operated an egg farm. He was ordained a minister in the Primitive Baptist Church in 1958, and also worked as a salesman for Amway products.

Hunt was active in the Republican Party from the days when the Democrats held near-total control of the state. He first ran for office in 1962, an unsuccessful run for the Alabama Senate. In 1964, he was elected to the Cullman County Probate Court on the coattails of Barry Goldwater, who was challenging incumbent Lyndon Johnson's Civil Rights record.

Hunt, the youngest probate judge in the state, was reelected in 1970 without benefit of a popular national ticket. He stepped down in 1976 to honor a promise to serve only two terms. He was appointed state chairman of Ronald Reagan's presidential campaigns in 1976 and 1980 and chaired the state's Republican delegation at the 1976 and 1980 Republican National Conventions. He ran for governor in 1978, losing in a massive landslide to Democrat Fob James.

After Reagan won election in 1980, he appointed Hunt as State Director of the Agricultural Stabilization and Conservation Committee. He resigned in 1985 to run for governor. His campaign was not taken seriously at first even among Republicans, who were more concerned about helping Senator Jeremiah Denton win reelection. The press paid little attention to the Republican gubernatorial primaries, fully expecting that the nominee would be the next loser in the general election.

However, a fracas in the Democratic primary changed the picture. That race saw then Alabama attorney general Charles Graddick in a runoff with then lieutenant governor Bill Baxley. Graddick won by a few thousand votes. However, Baxley sued, claiming that Graddick violated primary regulations by encouraging Republicans to “cross over” and vote as Democrats. The dispute made it all the way to the state Supreme Court, who told the Democrats to either declare Baxley the winner by default or hold another primary. The party picked Baxley. Alabamians, used to a one-party state where anybody and everybody could vote in a primary, were outraged and took out their frustrations by voting for Hunt. In November, Hunt won the election by 13 points and 56 percent of the vote, receiving the most votes ever for a gubernatorial candidate at that time. Hunt's election surprised many Alabamians since the last Republican governor had left office 113 years earlier, at the end of Reconstruction.

Hunt pushed through major tort reform and tried to bring more industry and tourism to the state, but had to wrangle through massive opposition in the state legislature. His hands-on approach earned him notice as one of the country's top governors according to U. S. News and World Report. His appointments to state boards and agencies strengthened the Alabama Republican Party and ushered in an era in which statewide politics was no longer dominated by Democrats. He narrowly won reelection in 1990 after trailing challenger Paul Hubbert most of the way. He spent most of his second term fighting ethics charges.

Conviction and removal from office

In 1992, a grand jury indicted him for using $200,000 of his 1987 inaugural fund to pay personal debts, as well as buy cattle and equipment for his farm. Hunt had long attested that he believed the money came from a campaign account that allowed spending for personal use. Hunt's accountant, Gene McKenzie, could have corroborated Hunt's story (and later would). But at the time, he was under indictment as well and refused to testify for fear of self incrimination. Hunt was convicted on April 22, 1993 and was automatically removed from office pursuant to the state constitution, which disqualifies felons from holding office. Democratic Lieutenant Governor Jim Folsom, Jr., assumed the office of governor the same day. (Folsom returned to the lieutenant governorship in 2007.)

Hunt was sentenced to five years' probation in 1994 and ordered to pay back the funds in question plus a $12,000 fine. He sought an early release in 1998 but was rejected because he had paid his restitution at only $100 per month.

After four years, and when the indictment against him was dropped, McKenzie, the accountant, went public with his story. Standing before the Board of Pardons and Paroles, McKenzie acknowledged he might be guilty of bad judgment: He had diverted donations that prosecutors said were intended to go into a tax- exempt account to pay for Hunt's inaugural parties and transition team. McKenzie believed the donations were meant for a political campaign account, permitting personal use, he said. "I made a decision that Guy Hunt knew nothing about, because he was a busy person," McKenzie said in a recent interview. "I made my decision based on what I thought was right. Apparently I made a bad decision." Considering McKenzie's testimony as new evidence, and acknowledging that Hunt had completed his sentence and paid his restitution, the board granted Hunt a pardon based on its belief that he was innocent.

Hunt was issued a pardon a few months later by the Alabama Board of Pardon and Parole on the grounds that he was innocent of the charges that the then-Attorney General Jimmy Evans had brought against him. Two of the three members of the Board were appointed by Hunt. His remaining restitution was paid by his attorney, Republican supporters, and some undisclosed loans. The Board granted Hunt a rare full pardon, restoring his voting rights and enabling him to enter the 1998 gubernatorial race.

With his full pardon in hand, Hunt entered the 1998 Republican gubernatorial primary against the incumbent James. His comeback failed, however, as he earned only 28,652 votes (8.2 percent). Hunt did, however, carry his native Cullman County. After the loss Hunt largely receded from the public spotlight. He reappeared in 2002 to run for the Alabama State Senate, and was defeated by Democrat Zeb Little.

After the death of Helen, his wife of fifty-three years, Hunt remarried (Ann) in 2005. He resumed his career as a minister, and traveled widely on speaking and preaching engagements. For more than forty years he published a small church paper, Pathway of Truth, and in 2007 his most impressive articles were collected into a single volume and released for publication by Harold Hunt (an unrelated minister in Tennessee). The work is entitled The Best of Elder Guy Hunt.

Hunt was diagnosed with stage-IV lung cancer in mid-2006. He underwent treatment in Tulsa, Oklahoma for a while before returning to the state. He died while undergoing additional treatment at Trinity Hospital in January 2009. He was survived by his wife, Anne; son, Keith; and three daughters, Pam Hunt, Sherrie Williams and Lynn Harris. The town of Holly Pond opened a Guy Hunt Museum and Library in 2012.