This article is about the current Hampton Inn - Tutwiler. For the 1914 hotel on 20th Street, see Tutwiler Hotel. 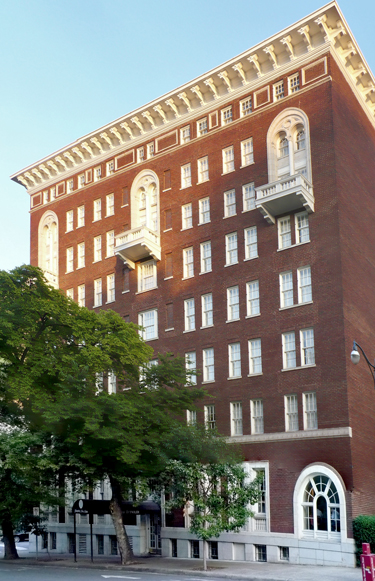 The Tutwiler Hotel seen from Park Place in September 2010

The Hampton Inn and Suites Birmingham-Downtown-Tutwiler (often called the Tutwiler Hotel) is a 149-room luxury hotel located at 2021 Park Place near Linn Park. The hotel occupies the building that was constructed by Robert Jemison Jr and Edward M. Tutwiler in 1913 as the Ridgely Apartments.

The hotel is the second in Birmingham to have that name. The first Tutwiler Hotel, built in 1914 and named for Edward M. Tutwiler, its principal financial backer, was on the corner of 5th Avenue North and 20th Street. It was demolished in January 1974 to make way for the First Alabama Bank building (now Regions Plaza).

The "new" Tutwiler was developed by Porter, White & Yardley Capital with Milton Harsh serving as project manager. The commissioned the design from Kidd Plosser Sprague architects. The project was assisted with a federal Urban Development Action Grant, along with tax-exempt bonds and a Investment Tax Credit for historic preservation. Brasfield & Gorrie began construction on the project to convert the apartment building into a luxury hotel began in 1985. Restoration of the building's lost cornice was a key part of the redevelopment. A garden and grape arbor behind the building were preserved during construction. The Tutwiler Hotel opened to guests in 1986.

Until 2006, the Tutwiler was part of the Wyndham Worldwide. That year Integral Hospitality Solutions partnered with investor Harold Rosbottom of Dallas, Texas to purchase the hotel. The partners, led by Integral's Bill Murray, began a $9 million renovation of the entire hotel, including each guest room, the lobbies and public areas, the restaurant and retail spaces.

Icon Restaurant and Bar, a $1 million full-service restaurant opened by Alan Dobbs and Geoffrey Slate, formerly of Restaurant G, began serving meals in the hotel in late March, 2007. In April the hotel became part of the Hampton Inn & Suites brand. Slate departed Icon, and Dobbs sold the restaurant to Integral in September 2008.