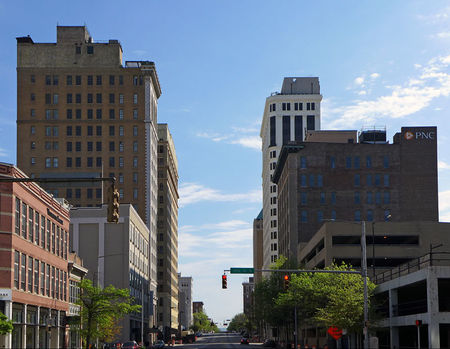 The "Heaviest Corner on Earth" in March 2020

The Heaviest Corner on Earth is a promotional name given to the corner of 20th Street and 1st Avenue North in the early 20th century. The name reflected the nearly-simultaneous appearance of four of the tallest buildings in the south, the Woodward Building (1902), Brown Marx Building (1906), Empire Building (1909), and the American Trust and Savings Bank Building (1912).

The announcement of the latter building was made in the Jemison Magazine in a January 1911 article entitled "Birmingham to Have the Heaviest Corner in the South". Over the years, that claim was inflated to the improbable "Heaviest Corner on Earth", which remains a popular name for the grouping. A 1925 directory and guide book to "Greater Birmingham" published by the Birmingham Age-Herald includes a photograph of the intersection labelled "Heaviest Corner in the World".

A marker, erected on May 23, 1985 by the Birmingham Historical Society with cooperation from Operation New Birmingham stands on the sidewalk outside the Empire Building describing the group.

The "Heaviest Corner on Earth" was added to the National Register of Historic Places on August 11, 1985.

THE HEAVIEST CORNER ON EARTH

At the turn of the 20th century, Birmingham was a small town of two and three story buildings with a few church steeples punctuating the skyline. During the industrial boom from 1902 to 1912 which made Birmingham the largest city in the state, four large buildings were constructed at the intersection of the city's main streets. The Woodward Building (now National Bank of Commerce), constructed in 1902 on the southwest corner, was the city's first steel-frame skyscraper. A good example of the Chicago school style of architecture, it brought a dramatic change to the vertical scale of the existing Victorian city. In 1906 the 16-story Brown Marx Building rose on the northeast corner; In 1908 an addition more than doubled its size. Long the South's largest office building, its principal tenant was United States Steel Corporation. The Empire Building (1909, northwest corner) and John A. Hand Building (1912, southeast corner) completed the "Heaviest Corner". Sheathed in marble, limestone, and terra cotta, they exemplify the more ornamental neoclassical style. Along the cornice of the Empire Building (now Colonial Bank), "E's" stand for the Empire Improvement Company, which built the tower.

At the time, the height and mass of the buildings was so impressive that the intersection of First Avenue North and 20th Street was proclaimed the heaviest corner on earth. Today these buildings represent the most significant group of early skyscrapers in the city.