Difference between revisions of "Highland Avenue" 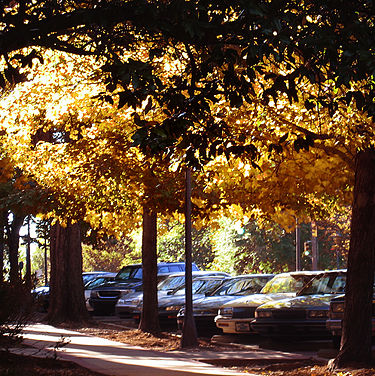 Highland Avenue is an east-west street that winds for about two miles along the northern slope of Red Mountain in Birmingham's South Highlands.

Highland Avenue was constructed by the Elyton Land Company in order to provide access to its 1,500-acre wooded property on South Highlands, which it wished to develop as residential estates. In 1884, with the company celebrating the payment of its first issue of bonds, secretary-treasurer and chief engineer Willis Milner suggested that the time was ripe to turn attention to the property, which was still "unbroken primeval forest", protected from timber poaching by agents of the company.

Given charge of the project, Milner planned a mule-drawn passenger railway beginning at 1st Avenue North and 19th Street and turning south along 22nd Street and branching east and west at 5th Avenue South. The two end-points, after extension, were at Five Points South and the intersection of 29th Street and 3rd Avenue South. Milner then planned, with a detailed topographic survey, the winding thoroughfare that would complete the loop. 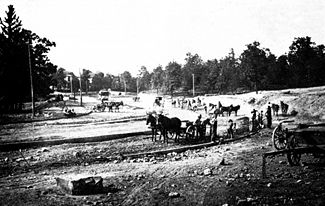 Construction of Highland Avenue in 1885

The right of way was set at 100 feet, with no more than 3% slope to accommodate horse-drawn carriages and trolleys. Care was taken to maximize attractive lot frontages wherever possible, and to provide parks in low areas where building would be impractical. Henry M. Caldwell, president of the Elyton Company, suggested the name "Highland Avenue". Milner's plan was located on the ground by his cousin, John A. Milner by April 1, 1884.

Immediately grading and construction was begun on a 25-foot wide roadbed in the center of the right-of-way. When that was completed, during the summer, the artificial lake at Lakeview was created by piping three springs into an excavated basin within the park's boundaries. Lakeview Park was planned as a resort to attract Birmingham residents up into the hillside for pleasure, and to inspect the prospective home sites along the way.

Later it was decided to replace the horse-drawn carriages with heavier, steam-powered dummies. The old 16-pound rails were pulled up and replaced with 40-pound rails to accommodate them. The result, which opened on June 26, 1886 was the first dummy line in the South, with trains leaving every 15 minutes, alternating directions on the one-hour round-trip loop.

By the 1960s, with the streetcar gone, the wide avenue's center median was frequently used for automobile parking. The issue of preserving accommodations for parking proved to be the key dispute in proceeding with improvements to the avenue. A report created in 1964 by Harold Bartholomew and Associates recommended street and landscape improvements. The Jefferson County Historical Commission was beginning a campaign to preserve the historic character of the street. By 1972 residents and business owners were meeting regularly with city officials to discuss ideas for improvement.

A major revitalization of Highland Avenue finally proceeded in the late 1970s. City Councilor Angi Grooms Proctor convinced the city to commission a landscape architect to oversee the project. Michael Kirk's design narrowed the road from four to two lanes and filled the middle lane with raised planting beds. Angled parking was added in front of apartment and commercial buildings and wide sidewalks were created with new lighting and other features. The project also involved repairs to storm and sanitary sewers. 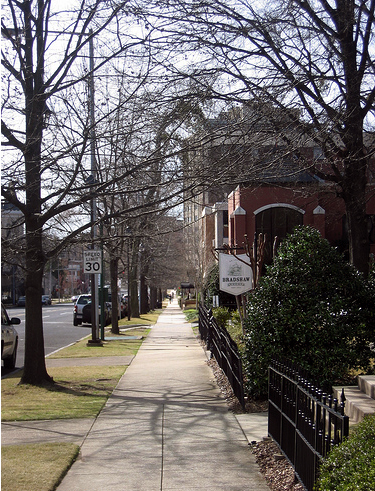 The western end of Highland Avenue begins at the intersection of 12th Avenue and 20th Street South in Five Points South. It follows roughly the path of 12th Avenue with the exception of the areas of Rhodes Park and Caldwell Park. Highland Avenue is home to many apartments, condominiums, office buildings, restaurants and bars as it winds it way approximately 14 blocks to the Highland Golf Course, where it takes a sharp northward turn. Its eastern end is at the intersection of Clairmont Avenue in the Lakeview District.

Highland Avenue hosts numerous events, the largest of which is the annual Do Dah Day parade and festival. 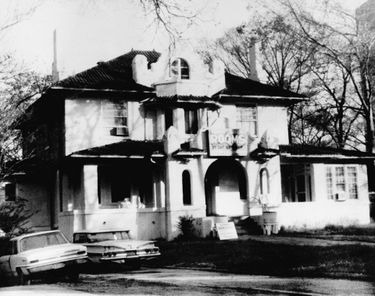 1968 photograph of a boarding house at 2608 Highland Avenue 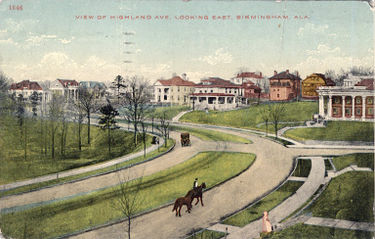