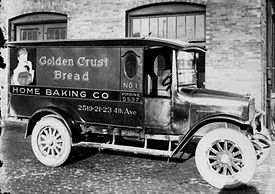 The Home Baking Company was a commercial bakery founded in 1920 by Tom Stevens, a Greek immigrant to Birmingham. Its main product was "Golden Crust" brand bread. It was first located at 2519 4th Avenue North.