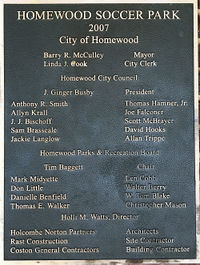 Homewood Soccer Park is located on South Lakeshore Drive in Homewood. Homewood issued the bond to pay for the park in 2001. The first phase was completed in April 2007 for $4.2 million.

The park consists of two regulation-size, Bermuda grass-covered soccer fields separated by a clubhouse building from which concessions can be sold. Each field can be divided into smaller playing areas for children's games. The park is for use by city park and recreation league soccer programs.

The park was estimated to cost $4.7 million in 2006. As of January 2009, the park's costs were closer to $9 million, and the final $1.56 million to build a third field and free up 6 acres at West Homewood Park was under scrutiny by the Homewood City Council. The three completed fields would allow Homewood to attract soccer tournaments and tourism to the city.