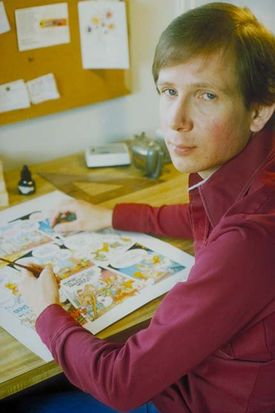 Howard Russell Cruse (born May 2, 1944 in Birmingham; died November 26, 2019 in Williamstown, Massachusetts) was a cartoonist, author and gay activist.

Cruse was the younger of two sons born to Clyde and Irma Cruse in Birmingham. The family moved to Springville when his father was ordained as a Methodist minister and assigned to Springville Methodist Church. The posting lasted only a year, after which he was ordained in the Baptist faith and accepted short-term postings while also working as a photo-journalist. Howard's creative talents were encouraged by both his parents and his father, who had been an aspiring cartoonist while at Birmingham-Southern College, purchased Rapidograph pens and India ink for him. He used them to create his first professional strip, "Calvin", which was published in the weekly St Clair County Reporter.

Cruse attended Indian Springs School as a boarding student and edited the "ISSINFO" school newspaper, which served as a vehicle for another comic strip, "Reuben", featuring a small dog as the title character. While in high school Cruse worked as a camp counselor at Camp Utopia, a combination camp and summer school. The already-prolific teenager had panels published in The Baptist Student and Mad Magazine knock-offs Fooey and Sick. He carried on a correspondence with Milton Caniff, the creator of "Terry and the Pirates" and "Steve Canyon" comic strips. His week-long visit to New York City highlighted by lunch at Sardi's with Caniff (and a two day stay at the Sloane House YMCA) made the Post-Herald.

He went on to Birmingham-Southern College, but did not proceed straight through, instead interrupting his undergraduate career three times. The longest period away involved his full-time employment at WAPI-TV (1964-65) where he served as assistant art director under Cliff Holman Sr, the father of legendary local TV personality “Cousin Cliff”.

He was drawn back to BSC because of his enthusiasm for the college's theatre program created by playwright/director Arnold Powell. The transformation of that program in 1966 from an extra-curricular activity to a full Department of Drama and Speech offering a major provided the crucial incentive for Cruse to finally complete his diploma.

Among the plays in which Cruse acted during his years at Birmingham-Southern Cruse were "The Visit", "One Way Pendulum", "The Imaginary Invalid", and Samuel Beckett's "Endgame". He also designed sets for “Ernest In Love”, “Women of Trachis”, “Blood Wedding”, and “Endgame”. Cruse's own full-length play “The Sixth Story” was given a workshop production, which Cruse himself directed as part of Dr Powell’s Advanced Playwrights Lab during his senior year.

While studying, Cruse drew a cartoon series called “Cruse Nest” for the college’s student newspaper and was a contributor to the 'zine "Granny Takes a Trip,” which was founded by fellow student Julie Brumlik. His four-page comic strip satirizing the John Birch society earned the disdain of the faculty advisor to the Quad literary magazine. It did run, but was accompanied by a full-page disclaimer.

Cruse continued to pursue television work, as well. During the 1963 summer term at Birmingham-Southern he and Leeds resident Grady Clarkson co-created a children's show for the start-up ETV public educational TV network. “The Grady and Howard Show” launched a productive relationship with WBIQ-TV that led to two Christmas specials for which Cruse provided drawings and that culminated with the station’s 1972 broadcast of his one-act play “Three Clowns on a Journey”. The program was produced by station manager Evelyn Walker with Cruse directing.

Cruse finally graduated from Birmingham-Southern in 1968 and moved to New York City for a year. He returned to Birmingham in 1969 and became an art director for WBMG-TV and performed as a puppeteer on the Sergeant Jack Show. It was during that period that he met "the first love of his life" Don Higdon, who was a sophomore drama student at Birmingham-Southern at the time of Cruse’s return to the city.

In his off hours Cruse created a cartoon panel about two squirrels, “Tops & Button,” which ran daily in The Birmingham Post-Herald from 1970-72. During the same period his mainstay comic strip, "Barefootz" got its first serial run in the University of Alabama's Crimson White. “Barefootz” survived the 1970s in a variety of Birmingham-area publications and eventually in a series of underground comic books. It was reincarnated many years later as a web comic.

In 1972 Cruse left WBMG and moved with Higdon to Atlanta, where the two of them worked as actors and set-design assistants at the Atlanta Children’s Theatre. When his relationship with Higdon ended, Cruse returned to Birmingham and soon found work as a paste-up artist at Birmingham’s Luckie & Forney Advertising Agency.

In 1977 Cruse decided to return to New York City and make a fresh try at forging a full-time cartooning career. After some false starts and eight months spent art directing Starlog magazine, Cruse was finally able to leave day jobs behind and make cartooning his full-time profession. In New York he also met his current partner Eddie Sedarbaum (a gay activist and 1998 candidate for New York State Senate). The couple moved to North Adams, Massachusetts in 2003 and were married in 2004.

From 1980-84, Cruse edited an anthology for gay and lesbian cartoonists called Gay Comix. Then, from 1983-85 and 1986-89 he drew a gay-themed strip called "Wendel", which was published in the Advocate. The magazine gave Cruse freedom to depict sexuality and social issues with unusual frankness in an era when AIDS and homosexual rights were daily news. He also contributed frequently to the Village Voice.

Cruse's 1995 graphic novel "Stuck Rubber Baby" has garnered favorable critical comparisons to landmarks of the genre like Maus. So far it has been translated into German, French, Italian and Spanish. A 25th anniversary edition was published in 2020. Wendel has also been translated into Spanish.

Cruse died from lymphoma in November 2019.