This article is about the UAB administrator. For others with similar names, see James Woodward (disambiguation). 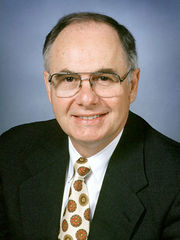 Dean earned his undergraduate and graduate degrees at the Georgia Institute of Technology, culminating with his doctorate in engineering mechanics in 1967. As a graduate student he served as an assistant professor at the US Air Force Academy. Entering the service as a 1st Lieutenant he was promoted to Captain in 1968. He taught at North Carolina State University for a year before coming to Birmingham in 1969 as an associate professor of engineering at UAB. While there he completed a Masters in Business Administration (1973) and took an outside job as director of technical development for Rust International from 1970 to 1973. He became an assistant to the vice president for University College that year and was promoted to full professor in 1977. He became the second dean of the Department of Engineering on September 15, 1978.

In 1983 Woodward was made the first director of UAB's Center for the Advancement of Developing Industries. A year later he became the third vice president for University College. While in Alabama Woodward chaired the Alabama Supercomputer Network Authority. Woodward left UAB to become chancellor of the University of North Carolina at Charlotte in 1989.

Over 16 years at UNCC Woodward oversaw significant expansion of the school's enrollment and programs, the awarding of its first doctoral degrees and a record-setting fundraising campaign. He chaired an information technology task force for the entire UNC system and on the North Carolina Education Lottery Commission. He retired in 2005 and still holds the honorary title of chancellor emeritus. UNCC's Woodward Hall was named in his honor.

Woodward received the UAB Distinguished Alumnus Award in 1995 and was given an honorary Doctor of Laws at UAB in 1997. In 2009 he was appointed interim chancellor for North Carolina State University.