Difference between revisions of "Jefferson County" 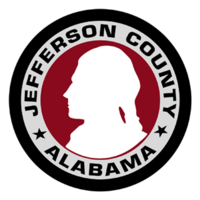 Jefferson County (established December 13, 1819) is Alabama's most populous county, with a 2021 population estimate of 667,820 residents, and is the center of the Birmingham-Hoover-Cullman Metropolitan Area. The county seat is split into two judicial districts: Birmingham, home of the main courthouse and the chambers of the Jefferson County Commission, and Bessemer, where a second courthouse handles cases from the western part of the county.

The county is located in the north-central portion of the state, on the southern extension of the Appalachians, in the center of the iron, coal and limestone belt of the South. Jefferson County is bordered by Blount, Bibb, St. Clair, Shelby, Tuscaloosa, and Walker counties. It encompasses 1,119 square miles.

The county ranges in elevation from 240 feet to 1,480 feet at Butler Mountain, northeast of Pinson. The Locust Fork River flows southwest along the western part of the county, joining Mulberry Fork before emptying into the Black Warrior River. Turkey Creek, Five Mile Creek, Village Creek and Valley Creek arise in Jones Valley and also flow west toward the Black Warrior. Parts of the Cahaba River and its tributaries, flowing to the Coosa River, form the southern edge of Jefferson County.

The Warrior Coal Field covers the western half of the county, with Silurian and Devonian formations dominating the geology of the eastern part. The ten-mile broad Jones Valley runs across the county from Springville to the upper coastal plain in Tuscaloosa County. Confined by Sand Mountain to the northwest and Shades Mountain to the southeast, the valley floor is marked by smaller ridges, including Red Mountain, which protrudes highest in the vicinity of Birmingham, dividing the central part of Jones Valley from Shades Valley. The smaller Enon Ridge divides the central part of Jones valley from Opossum Valley.

Surviving evidence of prehistoric human activities in present-day Jefferson County is scarce, with the Talley mounds on the banks of Village Creek being the notable exception. During the historic period, the area now encompassing Jefferson County was part of a large neutral ground separating Creek, Cherokee, Chickasaw and Choctaw tribes which had settled the state. With no large native settlements, the wilderness was used for hunting and various ceremonies. One small settlement of the Upper Creeks was located on Turkey Creek near Trussville.

In 1814, before Alabama became a state, the area now designated as Jefferson County was ceded to the United States by the Treaty of Fort Jackson and became part of Monroe County in the Mississippi Territory.

A bitter scuffle between factions of northern and southern Blount County resulted in another split later that same year. Jefferson County was established on December 13, 1819 by the Alabama legislature, then meeting in Huntsville. It was named in honor of Thomas Jefferson. third president of the United States. The original boundary of the new county was described thus:

Those boundaries were altered quickly with the addition of a portion of St Clair County in December 1820. The first court was held at the cabin of Moses Kelly, near present-day Woodlawn. In 1819 it was moved to the home of Frances Nabers in Carrollsville (near present-day Powderly) . A courthouse was constructed in Elyton in 1820. A county-wide referendum resulted in the move of the County Seat to Birmingham in 1873.

Jefferson County is one of the few counties in Alabama that has a limited-form of home rule government. This limited ability of home rule allows the county to be able to establish its own land use zoning, maintain sewers and roads, carry out garbage disposal, and enforce taxation (except property taxes).

The dual court districts came about when the state legislature made preparations to split off a portion of Jefferson county to create a new county with Bessemer as its county seat. The idea was dropped but the additional courthouse and parallel positions remain. The main courthouse is in Birmingham and the second, known as the Jefferson County Courthouse Bessemer Division, is located in Bessemer. In order to better serve citizens in western Jefferson County, most assistant officials, such as the Assistant District Attorney, Assistant Tax Assessor, and Assistant Tax Collector have their offices in the Bessemer Annex.

Jefferson County is served by the Jefferson County Sheriff's Department. The Sheriff is chosen in an at-large election. The current Sheriff is Mike Hale, who was re-elected in 2006. The department fields about 175 officers who patrol the unincorporated areas of the county and municipalities that do not have their own police. They also participate in special operations within other police districts. The Department maintains two jails, one in Birmingham and one in Bessemer, housing inmates awaiting trial and serving sentences.

Except for cities that have established their own local school districts, all parts of Jefferson County outside of the city limits of Birmingham are served by Jefferson County School System.

From 1967 until January 1, 2005, Jefferson County collected a 1% sales tax on general purchases in the county. In October 2004 a Commission voted to add an additional 1% sales tax to fund bonds for school construction.

The Jefferson County sewer system incurred enormous debts in the late 1990s for repairs, upgrades and expansion of its sewer and water treatment infrastructure. Part of the work was required by a 1996 consent decree forged to insure that the system complied with the requirements of the federal Clean Water Act. Other expansion was undertaken at the same time to add ratepayers to the system to help pay back the debt and to promote development in the county. As costs continued to climb, rate-payers saw their sewer rates shoot upwards to service the bond debt. A 2003 audit of the sewer project found a critical lack of planning, unqualified project management, serious accounting deficiencies, and arrangements with contractors that opened the county to unusual risk. Later it was found that numerous county officials had accepted bribes from contractors.

Efforts to hold down increases in sewer rates led the county to negotiate numerous refinancings of its bond debts. Following the advice of outside financial consultants and its own finance director, Jefferson County entered into an extraordinary number of interest rate swaps. Inquiries into those deals found that the county was paying its advisors and bankers unusually high fees and the Securities and Exchange Commission has opened an investigation of possible violations of securities laws.

Due to a national crisis in the mortgage lending sector which emerged in 2007, the insurers, which were supposed to have kept the bonds' variable interests rates low, were no longer able to cover the bonds. As a result, interest rates shot up from around 3% to over 10% at variable-rate auction. With no ability to cover the massive debt service payments, the county entered into emergency negotiations with its bondholders and began openly considering Chapter 9 bankruptcy. If the county did default on its debts, it would be the largest bankruptcy by a municipal government in United States history.

In June 2009, after the Alabama Legislature failed to replace the illegal Jefferson County Occupational Tax and no solution had been reached in the sewer debt crisis, the County Commission voted to close its satellite courthouses, cut hourly workers to four-day weeks, suspend all road maintenance contracts in cities, postpone opening the Jefferson County Bessemer Justice Center, and suspend non-essential travel. The cuts are expected to save $38 million. Additional cuts are expected as the county labors to make up for a $78 million budget deficit.