Difference between revisions of "Jefferson County Department of Health"

Prior to the establishment of a formal authority in 1917, the county utilized the services of private physicians as health officers to prepare morbidity data and make recommendations regarding public policy. These officers were recommended by the Jefferson County Medical Association under the authority given to the Medical Association of the State of Alabama. Doctors James Luckie, Henry Winn and John Dozier served as health officers for both Jefferson County and the city of Birmingham prior to 1890.

That year the Birmingham Board of Aldermen hired two full-time sanitation officers to carry out the directives of part-time medical officer Henry Rosser. Under his leadership garbage collection and sewer connections were improved.

A dispute between the City of Birmingham and the Jefferson County Board of Health over the authority to hire and fire health officers was fought both in court and by blows in the hallway of Birmingham City Hall. Robert Harkness was dismissed as City Health Officer after making a report that blamed a rise in infant mortality on contaminated milk despite positive reports from milk inspections conducted by the city's own bacteriologist. Mayor Frank O'Brien attempted to negotiate his retention, but the Council resisted until the Alabama legislature reiterated the authority of County Medical Societies to name health officials.

Beginning in 1911, Robert Nelson served as health officer for a rapidly growing Greater Birmingham. Federal statisticians criticized the overwhelmed office for reporting nearly 80 percent of deaths as "cause unknown". Nelson's successor R. N. Cunningham saw the department grow as it resumed responsibility for food inspections and began providing nursing service to the children of poor families.

Jefferson County established a full-time health department in 1917, partly as a response to an outbreak of typhoid traced to tainted milk. It was the third such county health department to be created, following Walker County (1914) and Tuscaloosa County (1915). Judson Dowling was named the county's first full-time health officer. His first task was to investigate the more than 100 independent dairies selling raw milk to the public, finding that half of the samples tested were watered down and/or adulterated with boric acid, and was also often infected with bacteria. In October 1918 he helped coordinate the response to the 1918 influenza pandemic. In 1920 he successfully lobbied for an ordinance requiring pasteurization as well as dairy inspections. One night in 1921 a group of masked men lured him from his home under false pretenses, took him into the woods and flogged him, warning him to pack up and leave town. The public responded with overwhelming support for his reforms and additional ordinances against wearing masks in public and arranging meetings under false pretenses were passed. The number of newly-reported typhoid cases dropped from 1,825 per 100,000 to 29 per 100,000 as an estimated 80% of the milk sold in the city was pasteurized. 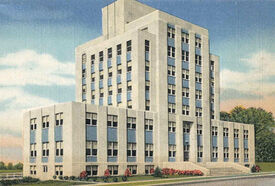 During the Great Depression the department saw its budget cut sharply, making it impossible to maintain food service inspections. An outbreak of foodborne illness at Ensley High School in 1936 was traced a batch of creampuffs from a local bakery that Dowling later described as "filthy". Though the budget improved, the department remained understaffed through World War II. In 1948 the department moved into a new Health-Welfare Building on the northwest corner of 20th Street and 8th Avenue South.

The Health Department also lobbied for continued sanitary improvements. They fought real-estate interests to require indoor plumbing and sewer or septic tank connections in new housing. The department was the first in the state to gain authorization to inspect public swimming pools and bathing houses. In 1950 the department began certifying all systems of wastewater disposal.

In 1934 the Health Department argued successfully for ordinances requiring rabies inoculation for dogs and for the trapping and impoundment of strays. The County Health Department took over operation of the City Pound in 1954 and authorized it to contract its services to neighboring municipalities. Strong enforcement of the law virtually eliminated the threat of rabies in the county by 1960.

Beginning in 1960 the Health Department began inspecting X-ray equipment and other sources of radiation. During that decade the department also began collecting data on airborne pollutants through a federal grant. The department took action on November 16, 1973 after recording levels that indicated emergency action under the requirements of the newly-passed Clean Air Act. Their requests for voluntary temporary shut-downs by particle-emitting industrial plants were ignored until EPA representatives obtained court orders mandating the shut downs. This injunctive action was never repeated by the EPA as preventive controls became more widely adopted. The Jefferson County Department of Health remains the permitting authority and administrator for the Clean Air Act across Jefferson County, while the Alabama Department of Environmental Management is the authority in the rest of the state.

Beginning in 1989 the inspection of communal homes such as nursing homes fell under the authority of the Health Department to insure the safety and well-being of residents.

In 2008 the department's public education campaign regarding an outbreak of syphilis was criticized by Mayor Larry Langford and Jefferson County Commission president Bettye Fine Collins (a member of the Board of Health).

In the wake of the 2020 Coronavirus pandemic, several bills were filed in the Alabama State Legislature to limit the power of the county health department to issue orders affecting businesses.