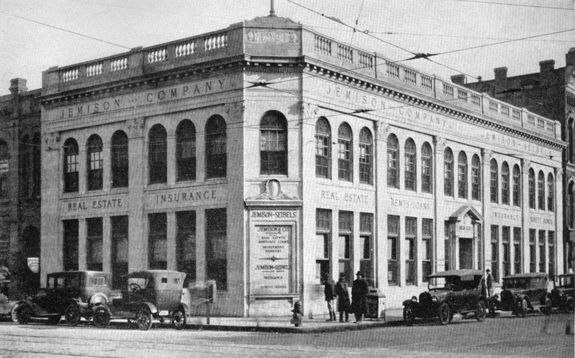 The Jemison Building (also known as the Jemison-Seibels Building or Jemison and Companies Building) was a large Renaissance Revival-style building housing the Jemison Company and Jemison-Seibels Insurance Agency on the southeast corner of 3rd Avenue North at 21st Street North. The monumental limestone building topped with a deep cornice and stone balustrade was designed by Warren, Knight and Davis and constructed in 1925 by Smallman Construction.

Originally the building extended for five bays to either side of the chamfered corner, which was topped with a flagpole. Each bay had three tall rectangular windows topped with three tall circular-arched windows above. The bays were divided by composite-style pilasters, connected by a moulded architrave below the cornice.

In 1959 the adjacent Jackson Building, as well as the western two bays facing 3rd Avenue and the entire 21st Street facade of the Jemison Building, were stripped and re-clad in a modernist arrangement of Texas granite and Alabama marble slabs. The redesign was carried out by Charles McCauley Associates on behalf of Jefferson Federal Savings & Loan.

The remaining three bays of the original Jemison Building were cleaned and restored in 1976 for the Lawyer's Title Insurance Corporation. The pedimented entry and original bronze door remain, now on the right edge of the remaining asymmetrical facade.