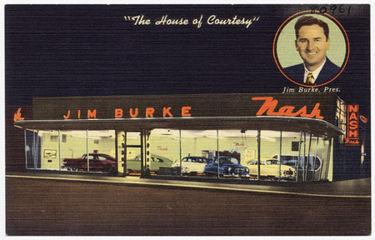 The Jim Burke Automotive Group was founded by Jim Burke in 1945 as a Nash dealership located at 300 22nd Street South. He had previously owned a Ford dealership in Rochester, New York.

Burke sold his 25,000-square foot Nash showroom to William Bailey when he landed a Buick franchise in 1952. He built a new showroom north of downtown, beginning a series of expansions that was continued by his son, Jim Burke Jr, who took over the company in 1976.

Currently the group is comprised of 13 dealerships in 5 locations and employs over 385 people. The group's headquarters are at 1301 5th Avenue North.

In 2020 a group of current and former employees filed a racial discrimination complaint against the dealership with the U.S. Equal Employment Opportunity Commission.