This article is about the former Jefferson County Sheriff, for others with similar names see James Woodward (disambiguation). 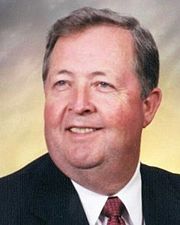 Woodward graduated from Minor High School in 1955 and enlisted in the Air Force, serving until 1958. He graduated from Jefferson State Community College in 1970 and attended UAB before completing his bachelor's degree at Samford University in 1985. He also earned a diploma in 1980 from the FBI National Academy. He joined the Bessemer Police Department in 1959, then transferred to the Jefferson County Sheriff's Office in 1968. He was promoted to sergeant in 1972, to lieutenant in 1979, to captain in 1983, and to chief deputy in 1993.

After the retirement of Sheriff Mel Bailey in 1996, Medical Examiner Robert Brissie assumed the duties of the office until Governor Fob James appointed Woodward to serve until a special election could be called. Woodward won re-election in that race and completed the two years remaining in Bailey's term of office.

In the 1998 general election Woodward appeared to have lost to challenger Mike Hale by 37 votes. Hale took office in 1999 while a recount was made and appealed to the Alabama Supreme Court. The court found that Woodward had won by 6 votes and installed him back in office. Hale challenged Woodward in the 2002 Republican primary, defeating him and winning the office in the general election.

In 2006 Woodward was convicted of improperly using the resources of his office to run criminal background checks on absentee voters from the 1998 election which he planned to use in his challenge. He lost an appeal and served a six month probation.

Woodward once again challenged Hale in the 2010 Republican primary.

Woodward is a member of Gardendale Baptist Church and a Master Mason of Metro West Lodge No. 927.