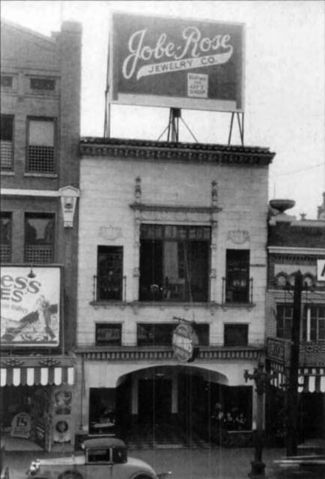 The Jobe-Rose Jewelry Company was a jewelry store located at 1917 2nd Avenue North in downtown Birmingham. The business was founded when Mississippi native William Jobe (1840-1897) began repairing fellow soldiers' watches during the Civil War. After the war he opened a shop in Columbus, Mississippi and later sold it to the Rose family, who moved the business to Birmingham in 1902.

The Jobe-Rose Jewelry Company was incorporated by James N. Rose with $100,000 capital in 1924. John Griffith was a part-owner. Later Albert Britton was president of the company. In 1959 the shop moved to 1918 3rd Avenue North, hiring architect Lawrence Whitten to remodel the facade with modern metal cladding. Soon a second location was established at 2830 Culver Road in Mountain Brook Village, which moved to the Brookwood Village shopping mall when it opened in 1974.

Also in 1974 Jobe-Rose marketed a trio of "Alabama History" commemorative china plates with blue illustrations and gold lettering. The plates depicted the First Confederate White House in Montgomery, the "Ivy Green" home of Helen Keller in Tuscumbia, and the statue of Vulcan in Birmingham. They sold for $15 each.