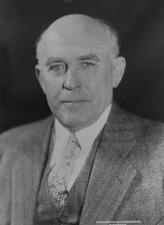 John H. Bankhead II
John Hollis Bankhead II (born July 8, 1872; died June 12, 1946 in Bethesda, Maryland) was a U.S. senator from Jasper. Like his father, John H. Bankhead, he was elected three times to the Senate, and like his father, he died in office. He served in the Senate from March 4, 1931, to his death on June 12, 1946. He was first elected to the Senate in 1930 by defeating J. Thomas Heflin, the man who succeeded his father. Though Bankhead won the election by 20 points, Heflin challenged the results for over a year. He served as chairman of the Committee on Irrigation and Reclamation. After his death, Bankhead was succeeded by George R. Swift, who was appointed to fill his seat until a successor, John J. Sparkman, could be elected.

Bankhead is remembered as a spokesman in favor of farmers, and against civil rights for African Americans. After earning his law degree in 1893 and practicing law for ten with his brother William, Bankhead was elected to the Alabama House of Representatives in 1903. After Alabama's grandfather clause, that disenfranchised most black voters, was declared unconstitutional, Bankhead was one of the authors of Alabama's revised voting law that effectively kept most black voters from registering, through a series of tests and poll taxes. Following his controversial win over Heflin in 1930, the Senator from Alabama worked at the passage of various pieces of New Deal legislation to benefit cotton farmers, including the Subsistence Homestead Act of 1933, the Cotton Control Act of 1934 and the parity payment amendments to the Agricultural Adjustment Act of 1938. In 1943, he sponsored legislation to exempt "substantially fulltime" farm workers from the draft during World War II. Bankhead was in third place, with 98 votes, when delegates to the 1944 Democratic National Convention were considering President Roosevelt's running mate. He made a surprise withdrawal of his candidacy in favor of his Senate colleague, Harry S. Truman, who was elected Vice-President and succeeded to presidency in 1945. On May 24, 1946, Senator Bankhead suffered a stroke while attending an evening Senate committee meeting. Three weeks later, he died at the U.S. Naval Hospital in Bethesda, Maryland. He was the brother of Speaker of the House William Bankhead, and the uncle of actress Talullah Bankhead.