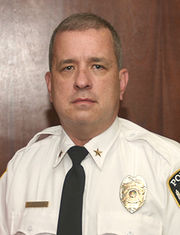 He had previously served as public safety director and chief of the Hanceville Police Department beginning in 2007,

Duchock died at home in 2015. He was survived by his wife,