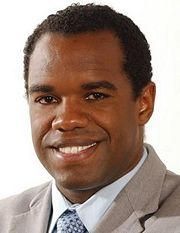 Johnathan Fitzgerald Austin (born February 5, 1979) is the executive director for the Center for Urban Missions, founder of Fitz consulting, and formerly District 5 representative and President of the Birmingham City Council.

Austin is the son of New City Church founder Gerald Austin, Sr. He graduated from John Carroll High School in 1997 and attended classes at the University of Alabama for three years before leaving to become chief operating officer for the Center for Urban Mission. Austin began working with the Center, founded by his parents, in 1996. He has led the development of several programs at the center, including RAMP, a for-profit business that refurbishes beverage equipment for Royal Cup and Buffalo Rock. He is currently the president and CEO of the Fitz technology consulting firm.

In 2003 Austin was arrested for possession of marijuana and drug paraphernalia found during a traffic stop in Tuscaloosa. He pleaded guilty to 2nd degree possession, a misdemeanor, and was given a 90-day suspended sentence and 2 years probation on the condition that he attend drug and alcohol treatment classes.

Austin is president of the Central City neighborhood and Northside community associations. He was selected on December 23, 2008 by a 5-2-1 vote of the Birmingham City Council to fill William Bell's unexpired term. He was sworn in on the same day. He successfully ran for re-election in the 2009 election, defeating Elias Hendricks in a runoff.

In 2010 Austin was one of 14 candidates to qualify for a special election to fill the Jefferson County Commission District 1 seat left vacant when William Bell was sworn in as Mayor of Birmingham, and one of ten for the full term beginning in November. He lost in a runoff with George Bowman in the special election, but promised unsuccessfully to "retake" the district in the June runoff for the full term.

Before he restructured the council committees in December 2015, Austin chaired the joint public safety & technology committee and sat on the parks, recreation & cultural arts committee. He actively proposed new ordinances tightening restrictions on business owners in the city in order to improve public health and safety, such as the Birmingham smoking ordinance and the "Kevin Felder ordinance" setting strict rules for nightclub security. He also championed the city's Ride-sharing ordinance through several delays.

In his 2013 reelection bid, Austin discussed the need for businesses to act as good neighbors as the city works to increase its tax base to better serve residents. On December 3, 2013 Austin was elected to succeed Maxine Parker, who died in office, as council president.

Austin proposed changes to the Council's committee structure in December 2015. Afterward he chaired the Administrative/Technology committee and also sat on the Economic Development, Budget & Finance committee.

Austin was arrested in Mountain Brook for driving under the influence on December 19, 2014.