In October 1925 the restaurant moved to 412 20th Street North opposite the Tutwiler Hotel., soon expanding into the former shop next door. The owners of the popular restaurant earned a reputation as friendly, generous business owners, sometimes helping provide meals to the needy. That reputation served them well as the Ku Klux Klan found no support from the public in efforts to drive the restaurant out of business. 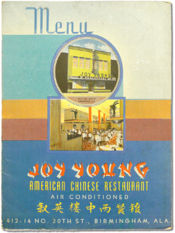