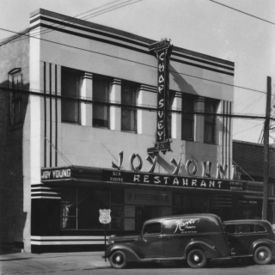 Several varieties of "chop suey", "egg fooyoung", and "chow mein" dominated the portion of the menu labeled "Mandarin Style". The other half of the menu listed "American" favorites for less adventurous diners. The restaurant served seafood, poultry and meats with french fried or creamed potatoes, english peas and fried tomatores, and club or chicken salad sandwiches. The Birmingham News listed Joy Young's fried chicken (1/2 spring chicken, fried for $1.25 in 1950) as the best in Birmingham. Some of the booths had curtains that could be drawn for privacy. The reviewing stand for the annual Veteran's Day Parade was usually directly across the street from Joy Young.