Difference between revisions of "Legion Field" 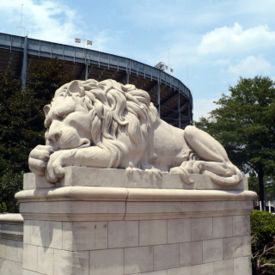 A stone lion at the south entrance to Legion Field

Legion Field, sometimes referred to as the "Old Gray Lady" or "The Football Capital of the South", is a large stadium at 400 Graymont Avenue in McLendon Park in the Graymont neighborhood. It is primarily designed to be used as a football venue, but is also used for other large outdoor events. Following a public contest to choose a name, the stadium was named in honor of the American Legion, a U.S. organization of military veterans. After several expansions, its peak capacity was 83,810 for a soccer match during the 1996 Olympics. The recent removal of the upper deck has reduced the capacity to 71,594.

Construction was begun in 1926 using designs developed by David O. Whilldin. The stadium, which originally seated 21,000, cost $439,000. It was dedicated on November 19, 1927 with a game between local colleges Howard and Birmingham-Southern. Howard won the game 9-0. Some of the proceeds from the game helped fund the Memorial Entrance for the stadium, enlargement of which was already being contemplated. The first expansion, to 25,000 seats, was completed in 1934. The next expansion was completed in time for the 1947 season, filling in the south end zone and bringing the capacity to 32,000. In 1948 the horseshoe was completed, with concrete seats on all three sides reaching to the same height and accommodating a total of 45,000 fans. 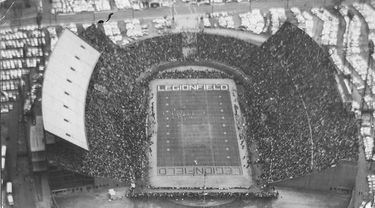 A 9,000-seat upper deck was added to the stadium in 1961-62, increasing capacity to 54,000. Shortly before the work was completed Mayor Art Hanes told the Park Board that he needed, "someone to tell me that the upper deck is completely safe before I OK it or allow anybody to go up there. Merely performing the work is not enough for me. The last time work was done according to the plans, but it was learned later that the deck was not safe." The board agreed to require a joint letter from Greer, Holmquist & Chambers architects and Rust Engineering attesting that the deck was "100% safe", but the delay required the stadium to assign folding chairs at ground level to ticket holders for the events scheduled before the letter was accepted. A new public address system was installed by Tanner Communications in advance of that fall's Alabama-Georgia game. 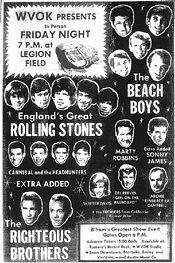 Ad for a May 7, 1965 "Shower of Stars" concert featuring the Rolling Stones and the Beach Boys at Legion Field
In 1964 the park board announced plans for another 13,888 seat upper deck expansion along with a new press box, concession stands and dressing rooms, designed by architect John Davis. The new press box was also was designed to accommodate up to 300 members of the press, with built-in dark rooms, restrooms and elevators. The expansion was estimated to cost $800,000 based on a recently completed $42 per seat expansion of Cliff Hare Stadium in Auburn. A bond referendum for that amount was approved by a 3-to-1 margin on March 24, but when bids were received in June it was learned that the total cost would be in excess of $1.4 million, partly due to increases in steel prices, partly due to the unforeseen need for new electrical equipment, and partly because of ramps needed to access the new seating areas which had not been needed in Auburn.

The Board decided to delay the concession stands and dressing areas while proceeding with the press box and the steel construction at the upper deck. The number of seats to be installed would be contingent on finding additional funds. Gamble Inc. of Mobile was awarded a contract for steel fabrication and erection. Hoar Construction won the bid for installation of pre-cast concrete decks along with the actual seats and other equipment.

By the opening of the 1964 football season, the seating capacity of the stadium was increased to 68,821. In 1969 new "Multi-Vapor" lamps were installed to allow night games to be broadcast on color television.

More seats were added in 1977, giving the stadium a capacity of 75,808. In 1991 another expansion gave Legion Field its peak capacity of 83,091 seats. In 1993, state officials had a 27-foot diameter Mercedes-Benz logo affixed to the exterior of the stadium's main scoreboard.

The logo was removed during the 1996 Olympics, during which Legion Field hosted opening round soccer competition. The success of that event ushered in an era of successful soccer competitions, including exhibition games by the U.S. men's and women's national soccer teams and a World Cup qualifier between the U.S. and Guatemala in 2005. The U.S. Women's National Soccer Team defeated Haiti 8-0 in a friendly game at Legion Field on September 20, 2015.

In 2005 the stadium's upper deck, which no longer satisfied current building codes, was removed, reducing seating to 71,594. A new video score board was installed at Legion Field just before the 2015 Magic City Classic game in October. As of 2019 the cost of maintaining and operating the stadium, though difficult to isolate in the Parks and Recreation budget, was well above $1.3 million per year, while revenues (from parking and concessions) averaged around $319,000 per year.

Legion Field will host the opening and closing ceremonies of the 2021 World Games.

Until 1970, the playing surface at Legion Field had always been natural grass. "PolyTurf" artificial turf was installed that year, and replaced with Astro-Turf in 1975.

To accommodate Olympic soccer, a high-tech, natural Bermuda grass surface was installed in place of the former Astro-Turf in 1996.

The original PolyTurf had been stored by the city and used occasionally to cover high-traffic areas on playgrounds and around athletic fields at other city parks. A large portion sold, in 2006, to the City of Gardendale, which used it for the same purpose. The remainder, 50 rolls, was auctioned on January 20, 2007 for a total of $4,145. The later Astro-Turf was re-used at Birmingham's Lawson Field.

In 2006, to accommodate high school football games, the Birmingham Park and Recreation Board reconverted Legion Field's grass surface to "Field Turf". That surface was still in place for the U.S. Women's Team friendly in 2015.

In 2019 the Birmingham Parks and Recreation Board solicited bids to replace the Field Turf with an NCAA and FIFA-compliant surface during the summer.

The south entrance to Legion Field from Graymont Avenue includes a wide formal stair flanked by a pair of large limestone sculptures of sleeping lions. A pair of flagpoles on broad limestone towers flank the top of the stairs. Bronze plaques mounted to the towers by the Birmingham American Legion Post No. 1 in 1929 list the names of all those from Alabama "who made the supreme sacrifice in the World War 1917-1918". The entranceway was designed by architect D. O. Whilldin with the artwork executed by Scottish-born sculptor William Grant.

In 1985, the University of Alabama's A-Club erected a new monument, centered at the top of the memorial stairway, to honor former Crimson Tide football coach Bear Bryant. The granite monolith bears a bronze likeness of Bryant’s head in addition along with this inscription:

Americans have lost a hero who always seemed larger than life. A coach who made legends out of ordinary people, he was a hard but loved taskmaker, patriotic to the core, devoted to his players and inspired by a winning spirit that wouldn't quit.
"Bear" Bryant gave his country the gift of a life unsurpassed in making the impossible seem easy. He lived what we strive to be.

Until the 1990s the University of Alabama played the majority of their home football games at Legion Field, a practice that has now ended. Auburn University has used the stadium similarly for a while, but not as extensively. It currently serves as the home field for the UAB Blazers, who compete in Conference USA.

Legion Field was best-known for hosting the annual Iron Bowl between Alabama and Auburn every year from 1948 to 1988. In 1989 Auburn moved their "home" games in the series to their own stadium. Alabama followed suit in 2000. On August 19, 2004, the University of Alabama announced that they would not be playing any further home games at Legion Field, leaving UAB as the sole regular season tenant.

The stadium also hosts of the annual Magic City Classic played by Alabama A&M University (of Huntsville) and Alabama State University (of Montgomery), the two largest historically black universities in the state, since November 2, 1946. Additionally, between 2001-2006, the Steel City Classic pitting Miles College against Stillman College was played here before the game was shifted to a home-and-home series for the 2007 edition.

In addition, it hosts the title game for the Southwestern Athletic Conference, and was the site of the first two SEC football championship games.

Legion Field hosted its first National Football League exhibition game when the Chicago Bears visited to take on the Southern All-Stars on September 5, 1938. The Bears won the game 32-18. A total of 15 NFL and AFL exhibition games have been played at the stadium over the years.

In 1968 Legion Field substituted for Fenway Park as home turf for the Boston Patriots' home opener against the New York Jets. At that time, Birmingham was viewed as a potential relocation city for the Patriots franchise if a new stadium was not constructed in Massachusetts.

The stadium has served as home field for nine professional football teams during its history:

Legion Field has also been used as a concert venue. Artists that have performed at Legion Field include The Rolling Stones (October 5, 1989), Living Color, Counting Crows, Pink Floyd, and U2. 'N Sync was scheduled to perform at the stadium during their Pop Odyssey Tour on August 7, 2001, but the show was canceled due to weather conditions.

Legion Field was part of the Drum Corps International (DCI) tour for several years. In 1979 and 1980, the facility hosted the DCI World Championships. The touring event returned to Birmingham in July 2016, but was held at Mountain Brook High School.

In October 2006, Birmingham City Council President Carole Smitherman proposed that Legion Field be converted into a domed facility as an alternative to the proposed dome for the BJCC. The idea of covering the stadium was first proposed in the late 1990s with a thin, canvas like material. In addition to the proposed roof, a new parking garage would also be constructed as part of the project in an effort to draw more businesses to the Graymont Avenue corridor. The renovations would ideally serve as a catalyst for development into the Smithfield neighborhood.

In December 2007, after his Birmingham Economic and Community Revitalization Ordinance was passed, opening the way for construction of a new domed stadium, Mayor Larry Langford mentioned the possibility of demolishing Legion Field. The future of the stadium was again discussed in December 2014 following the announcement by UAB president Ray Watts that the UAB Blazers football team had played its final season.

Legion Field was set to receive nearly $4.5 million for repairs and improvements from the city's "Phase II Bond Projects" in 2016.

With completion of the new Protective Stadium at the BJCC in 2021, questions about the future of Legion Field became more pressing. City Council member William Parker has suggesting redeveloping McLendon Park as a multi-venue youth athletics complex. He solicited suggestions from the public and the Park and Recreation Board approved a motion to contract with a consultant on the future of McLendon Park. Meanwhile, as part of its "Westside Rising" initiative economic development nonprofit Urban Impact contracted with Think Rubix, a Washington DC-based polling firm, to conduct in-person and telephone surveys of west side residents. They reported that about 2/3rds of those surveyed favored redeveloping the park, with most having favorable opinions of programming the area for youth, young adult, senior and small business activities. Most respondents hoped that the stadium structure could be preserved as part of a more flexible redevelopment of the park. Residents who participated in an "Imagination Tour" interactive booth favored Atlanta's Centennial Olympic Park as the preferred model for what the park could become.