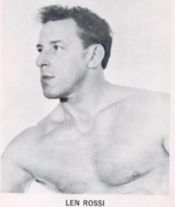 Len Rossi (born Len Rositano on September 24, 1930 in Utica, New York) was a regular on Channel 42 Live Studio Wrestling on Saturday nights and at Boutwell Auditorium on Monday Nights. During much of the 1960s and into 1972, Rossi was Birmingham's most popular wrestler.

In 1958, Rossi began working for promoters Nick Gulas and Roy Welch in Tennessee and Alabama. Don Kalt (Fargo) recommended Rossi when Gulas asked him if he knew a good babyface that needed a job. Kalt loaned Rossi a pink suit that the wrestler Buddy Rogers had given him and came up with an angle to introduce him to fans. Wearing the pink suit, Rossi did a run-in during a Fargo Brothers interview and drop kicked both Fargos several times before they fled to the dressing room. Rossi was immediately over with the fans. He had planned on working for Gulas and Welch for only two weeks.

In the late 1950s and early 1960s, Rossi was the the junior member of the very popular Len Rossi and Tex Riley tag-team.

After a three year hiatus, wrestling returned to Birmingham in 1965. Rossi was on the first card, teaming with Ken Hollis against the Medics. On that card he involved himself in the main event when he entered the ring to save Mario Milano from a Tojo Yamamoto and Alex Perez beating. On the following week's card, he worked the main event, teaming with Milano against Yamamoto and Perez.

In 1969, Rossi and black wrestler Bearcat Brown formed an enormously popular tag-team. Prior to teaming with Rossi, Brown wrestled in "colored" matches in Birmingham under the name Matt Jewell. Soon after teaming together, Brown and Rossi won the World Tag-Team Title, and for the next three years they were responsible for sellout crowds at Boutwell on numerous Monday nights.

Rossi was the Southern Jr. Heavyweight Champion for much of the 1960s.

Len Rossi’s original signature finisher was the Boston crab. After a short tour of Japan, he came back with a beard and a second finisher-- the sleeper. The sleeper always got a loud reaction from the fans. He was also known as a dropkick specialist.

Len wasn’t above using a foreign object to win a grudge match. Sometimes it was Tojo’s wooden shoe or some other object he snatched from his opponent, but more often it was a steel folding chair that he grabbed from ringside.

An automobile accident ended Rossi’s wrestling career in 1972 at the height of his popularity with the fans.