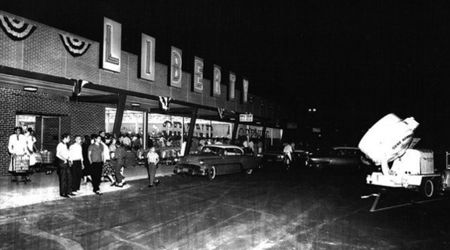 The Roebuck Liberty Super Market in 1960

Liberty Super Market was a grocery store chain with several locations in the Birmingham area. The chain was part of a regional cooperative sponsored by Fred Montesi & Sons, owners of the Liberty Wholesale Grocery Co. of Memphis, Tennessee.

The first Liberty Super Markets in Alabama were located in Sheffield and Florence. The first Birmingham location opened by Dominic Stignani on April 3, 1957 at 420 13th Street North in Birmingham's Fountain Heights neighborhood. The 60,000 square-foot store featured 18 check-out lanes, an in-house bakery, and "the South's largest dairy department." Outside was a 273-car parking lot. Mayor Jimmy Morgan cut the ribbon during grand opening ceremonies that Wednesday morning. Fred Fratini, Burl Thompson and Louis Giardino were also managers at the store.

Along with Pizitz, a second 60,000 square foot Liberty Super Market anchored the first extension of the Roebuck Plaza Shopping Center which opened in 1960 under the management of Louis Montesi. It was originally addressed at 9096 4th Avenue South, on the stretch that was later reoriented to become part of Parkway East. The new store was completely air-conditioned with the city's first "air cushion doors" in lieu of swinging doors. The fireproof asbestos ceiling was supplemented by an automatic sprinkler system. The new store featured 22 checkout counters. Louis Giardino took over operations by 1970. The Roebuck store closed in 1984.

The Fountain Heights store was the scene of mass protests organized by the Southern Christian Leadership Conference in February 1966 to protest discriminatory hiring practices and incidents of violence against African-Americans.

In 1983 Liberty Super Market's Homewood location and five other businesses were charged and convicted in Homewood Municipal Court for violating city ordinances by opening for business on Sunday. The city's "Citizen Committee for Keeping Sunday Business Closing Laws" issued the warrant and Al Hultquist prosecuted the case, which resulted in small fines. The businesses appealed the conviction to the Jefferson County Circuit Court.

Three Birmingham locations of Liberty Super Market were put up for sale in 1984 by Malone & Hyde of Memphis, Tennessee, which had taken over the Liberty Wholesale Grocery Company. Peter Gregerson, president of the Gadsden-based Warehouse Groceries Management, acquired the stores under the provision that he use Malone & Hyde as his supplier. He reopened one of the former Liberty locations as a Megamarket before ending the agreement and returning the property to its former owners.