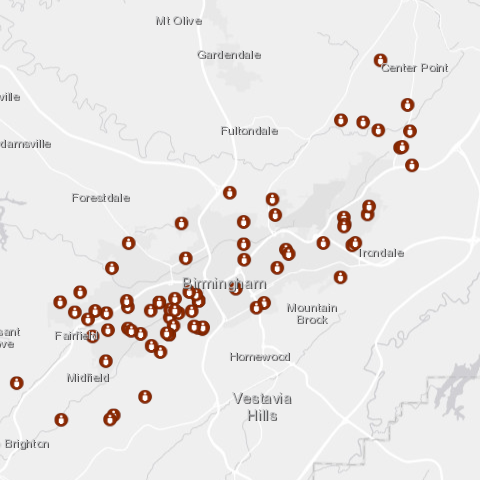 Map of Birmingham homicides in 2015

This is a List of Birmingham homicides in 2015. It includes homicide cases that occurred within the city limits during the calendar year. Note that a "homicide" refers to the cause of death as determined by a medical examiner, not to the commission of the crime of murder as charged by police and prosecutors.

Of the 100 reported homicides, suspects have been identified in 57 cases, apprehended in 51, and charged in 39. One other suspect died on the scene. Eleven incidents, including two police shootings, were justified as self-defense, eight were caused by reckless driving rather than malice aforethought, and one resulted from neglecting the welfare of a child. The police department therefore acknowledged 87 chargeable homicides, of which 78 were classified as murders. So far convictions have been secured in at least 18 deaths: 6 at trial and 12 by plea to lesser charges. Charges were dismissed in three cases and downgraded to reckless manslaughter by a grand jury in another. One suspect killed himself before his trial began.

At least eighty homicides were shootings, nine resulted from vehicle collisions, three from stab wounds, two from strangulation, one from blunt trauma, and three from abuse to children. Thirty-five took place on the streets, fifteen in yards or driveways, twenty-one inside homes, seventeen at apartment complexes, ten at places of business and two at public parks. Fifty-eight were reported in the West Precinct, 28 in the East Precinct, 5 in the South Precinct and 9 in the North Precinct. Sixteen deaths were the result of domestic disputes or love triangles, seven from ongoing disagreements, seven occurred during robberies, one was a staged fight that got out of hand, eight were drug related, eight were caused by reckless driving, and another resulted from child abuse. Eighty-eight victims were male and twelve were female.

Mothers Who Want The Violence To Stop organized a candlelight vigil at the intersection of 3rd Street and 4th Terrace North in Smithfield to memorialize the victims of the May 4 triple homicide. William Bell joined neighborhood president Shirley Floyd and Reverend Dwayne Thompson at the service, which also raised $1,000 to help the victims' families cover the expense of funerals.

In October, the 10th annual "Party With a Purpose" was hosted at Ensley Park by City Councilor Steven Hoyt and grocer Anthony Marino. The event seeks to advance lasting solutions for violence in the community through fellowship, job fairs and other entertainments.

Implementation of a "Violence Reduction Initiative" began in 2014. The program mirrors a successful initiative in Boston, Massachusetts and other cities that utilizes academic research done at Harvard University under criminologist David Kennedy. The research showed that a large share of violent crimes were committed by and against a relatively small segment of the population, which is also fairly closely knit into harmful associations. Coordinators research court records, parole records, and social media to develop a short list of those most likely to engage in violent crime. Then they bring them into a staged meeting with an array of local and federal officers to send a strong, coordinated message about the dire consequences of murder, not just on one suspect, but on all of their associations. The desired result is for those groups to begin policing themselves to avoid attracting the extra attention. In addition to "the stick", the program offers individuals a "carrot,", pairing them with a case worker that can work with them to break out of the circumstances that lead them to commit crimes.

Local officials such as Mayor William Bell, Birmingham Police Department Chief A. C. Roper, United States Attorney Joyce Vance, Jefferson County District Attorney Brandon Falls and Treatment Alternatives for Safer Communities were already interested in the program when incoming Community Foundation of Greater Birmingham direct Chris Nanni began connecting them to potential sources of funding. His Community Foundation partnered with the Alabama Power Foundation to underwrite the first two years, with the idea that the city would budget for the program thereafter if it was successful. Jarralynne Agee is the program's director in Birmingham.