Difference between revisions of "List of Birmingham homicides in 2018" 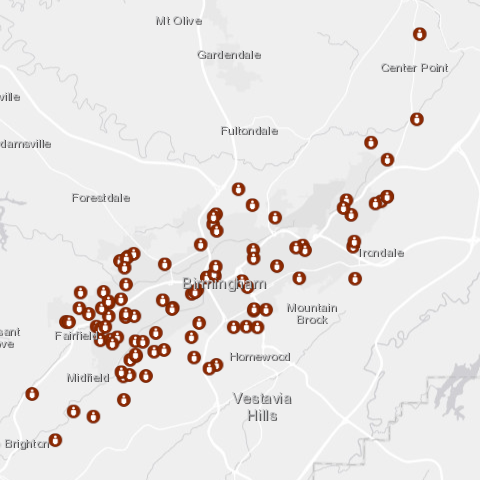 Map of Birmingham homicides in 2018

This is a List of Birmingham homicides in 2018. It includes homicide cases occurring within the city limits during the calendar year. Note that a "homicide" refers to the cause of death as determined by a medical examiner, not to the commission of the crime of murder as charged by police and prosecutors.

Eight of the reported homicides were ruled justifiable as self-defense by investigators or prosecutors. In one of those cases murder charges were filed against an accomplice of the victim. Five other cases resulted from reckless driving. The police department therefore acknowledges 97 chargeable homicides, eight of which were charged as manslaughter, one as reckless murder and the rest as felony or capital murder. Suspects have been identified in 53 cases, apprehended in 53, and charged in 48. Convictions have been obtained in 6 deaths, with 4 of them for reduced charges. One prosecution ended with acquittal. Charges in two other cases were dismissed, with one of those later pleaded down. Two suspects killed themselves before facing prosecution.

88 deaths resulted from shootings, 7 from stabbing, five from reckless driving, one by intentionally running someone over, 1 from an intentional fire, and 9 from unspecified causes. 39 incidents occurred on the streets, two at public parks, 38 at private homes, one at a school, 18 at businesses, and 10 at apartment complexes. 54 were reported in the West Precinct, 18 in the East Precinct, 15 in the South Precinct and 22 in the North Precinct. Three deaths resulted from self-defense, 9 from robbery, 7 from domestic incidents, 8 from sudden arguments, 21 over ongoing disputes, two from stray bullets, five from reckless driving, and the motive is unknown in 54 other deaths. One death is believed to have been the result of gang-related violence.

89 victims were male, 18 were female, and one was an unborn fetus. The Birmingham Police Department released the following statistics in early October, at which time they counted 79 criminal homicides: 70 were African American, 8 were white, and 1 was Latin American. 52 victims had criminal records and only seven were employed. Fifty-six victims were believed to be acquainted with their killers, including six who were romantically involved. Six victims were considered innocent bystanders. In late December the department reported 51 of 107 homicides still unsolved, for a 48.6% clearance rate.

Mayor Randall Woodfin and U.S. Attorney Jay Town led the formation of a task force to address violent crime in the area. Representatives of the Birmingham Police Department, the Jefferson County Sheriff's Office, the Shelby County Drug Task Force,. the Housing Authority of the Birmingham District, the Jefferson County District Attorney's Office, the Alabama Board of Pardons and Paroles, and several federal agencies. The group held its first meeting on April 13, 2018 in order to coordinate resources toward implementing the city's "Operation Step Up" program alongside the Department of Justice's "Project Safe Neighborhoods" and "National Public Safety Partnership". Among the strategies pushed by those programs is the idea of using shared information about repeat offenders to target "key offenders" in violent crime "hot spots" as the most effective means of reducing overall violent crime. Other priorities discussed by Woodfin included jobs programs and longer hours for neighborhood recreation centers.

The City of Birmingham provided $180,000 in grants to 24 community organizations to promote mentorship, character building and conflict resolution programs for Birmingham youth as part of an effort to reduce violence.

A Birmingham chapter of "Never Again", a student-led advocacy group which originated at Marjory Stoneman Douglas High School in Parkland, Florida after a mass shooting there was formed in the wake of Courtlin Arrington's death at Huffman High School. Birmingham students helped organize Birmingham's public demonstration for the 2018 March for Our Lives and 2018 National School Walkout. Superintendent of Birmingham City Schools Lisa Herring brought activists together into a "Student Advisory Committee" which hosted a town hall meeting at Parker High School in April to address gun violence.

Shortly after the December 10 triple shooting that caused the death of Venus Godhigh in the Smithfield Court public housing community Mayor Woodfin joined with assistant police chief Allen Treadaway, council members John Hilliard and Steven Hoyt, and HABD president Michael Lundy in going door-to-door to assure residents that they are committed to reducing violent crime and urge cooperation with investigators to prosecute those responsible.