Difference between revisions of "Lollar's Cameras" 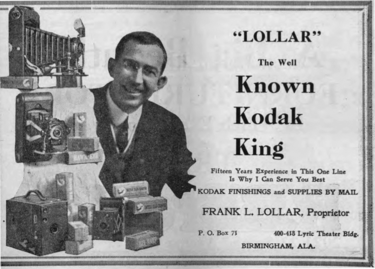 Lollar's Cameras (later Lollar's Kodak Parlor) was a photography retailer, repair service, equipment rental and photo finisher founded in Birmingham by Frank Lollar in 1910. From 1920 to 1923 the business was located on the 4th floor of the Lyric Building, but later expanded to several retail shops. Frank Lollar retired in 1961. His grandson, William Lollar succeeded him as president of the company.

Lollar's opened what was then its sixth store at Eastwood Mall in December 1965.