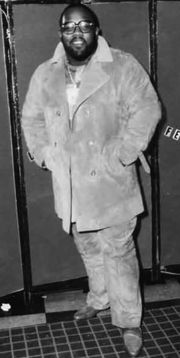 Nichols spent his early childhood in Birmingham, in the care of his grandmother. At about 10 years old he moved to New York to live with his mother, Louisa, and her third husband. He dropped out of school during 9th grade and began spending time with the Seven Crowns street gang. He was convicted on two robbery counts in 1976 and spent two and a half years of his 18-year sentence in prison.

After his release, Nichols organized an early African-American drug ring in the projects of Jamaica, Queens, buying from the Italian mafia. He involved many of his family members, recruited Pappy Mason, and sold drugs to another gang headed by Kenneth "Supreme" McGriff. He operated from "Big Mac's Deli", which had been owned by his wife, Joanne's, father. The deli was raided in June 1985 and Nichols was arrested on gun and drug charges. He made bail, but was re-arrested for violating his earlier parole. While in jail, Nichols' associates killed the parole officer.

For the rest of the decade, Nichols spent much of his time in prison, but was able to maintain control of his drug empire, sometimes by ordering the murders of people who turned against him. Attacks on his close associates came frequently and his convictions piled up to the point that the organization eventually unraveled. Nichols eventually pleaded to several crimes, including the parole officer's murder, presumably to take some off the heat off of his mother and girlfriend. He remains imprisoned in New York.