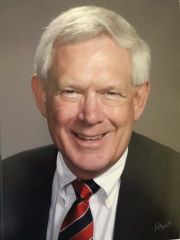 Rutherford Lyle Key Jr (born October 1, 1945 in Birmingham; died May 2, 2018 in Nashville, Tennessee) was an attorney, executive for Louisville & Nashville Railroad and CSX Transportation and a railroad historian.

After completing his law degree, Key joined the Louisville & Nashville Railroad as an attorney. He was promoted within the company, as it was absorbed into CSX, and reached the position of regional vice president for Alabama, Mississippi, and Tennessee.

Key maintained a historian's interest in railroad travel, especially the L&N lines and passenger railways that operated in the South. He published a book on Midwest Florida Sunliners in 1979, and co-authored Birmingham Rails: The Last Golden Era with his good friend and fellow historian Marvin Clemons in 2007. Key was an active member of several railroad history groups, and also chaired the University of Tennessee National Alumni Association.

Key died unexpectedly at Vanderbilt University Hospital in May 2018. He was survived by his wife, Carolyn, two children and five grandchildren. Key is buried at Elmwood Cemetery.