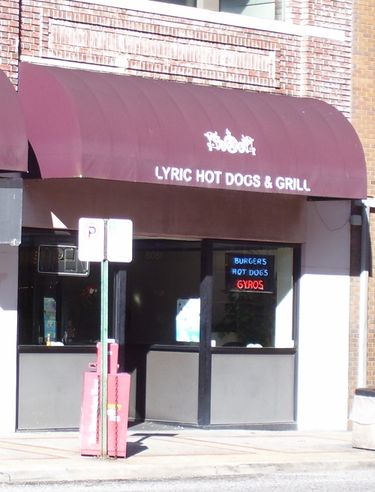 Lyric Hot Dogs was founded in 1957 by John Collins, a descendant of Greek immigrants. John's son Andrew began working there at age 13 in 1963. Andrew and his wife, Cathy, took over operations from his father in 1971. They expanded the original narrow lunch counter into an adjoining space in 1995. After Cathy died in September 2007, Andrew continued to operate the restaurant by himself until he closed the business six years later.

The restaurant served breakfast and lunch, and remained open until 5:00 PM on weekdays. The restaurant's specialty hot dog had a base of mustard and pickles covered with onions and chili. Its hot dog sauce was a variant of the sauce typical to Birmingham's Greek-influenced hot dog stands.

In late 2013 the building's owner, Birmingham Landmarks, gave Collins notice that his lease would not be renewed in order to allow for necessary renovations. Collins, who bought the former Metro Bar and opened The Collins Bar, decided not to reopen a hot dog stand in another location. The restaurant's last day in business was December 31, 2013.