This article is about the landmark welcome sign. For the custom sign business, see Magic City Signs. 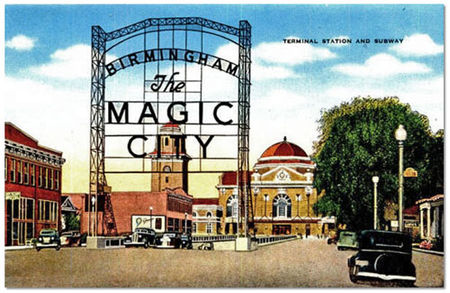 The sign welcomed numerous rail travelers to Birmingham over the years and became a cherished landmark. However, the sign was not maintained properly and by 1951 Birmingham building inspector H. E. Hagood was asking that the sign either be renovated or torn down. The sign's framework had corroded due to lack of paint and the wiring had deteriorated to the point it needed to be replaced. There are some reports of pieces falling from the sign onto the roadway. In 1952, Hagood reported that it would take $2500 to $3000 to restore it. Commissioner of Public Works Jimmy Morgan opposed renovation because more travelers then arrived in Birmingham via plane or car than train. He instead proposed spending that money to create smaller welcome signs at the airport and main highways. In the end, the money was not raised and the sign was torn down on June 13, 1952 and likely sold as scrap.

1940s photo of the Magic City sign as seen from the "subway" below the Terminal Station, courtesy BPL Archives

In January 2008 the Birmingham-Jefferson Convention Complex Authority announced that a replica of the historic sign would be erected as a gateway into The Forge, a planned entertainment district which did not come to fruition.

In November 2010, acting on rumors that parts of the sign remained in storage, Mayor William Bell instructed public works personnel to search city-owned warehouses in hopes of salvaging enough of the original for possible re-erection. The search was fruitless, but a re-created sign is planned as part of the $32 million expansion of Birmingham Central Station to accommodate passenger trains and buses. Bell announced a partnership with Regions Bank, YP United and WBHJ-FM to raise money for additional replicas which may be installed at Railroad Park, Fair Park, and other locations.

A depiction of a similar sign was shown in renderings of the Rotary Trail (originally "Line Park"), which runs through the 1st Avenue South railroad cut. Unlike The Forge sign, this was was built.