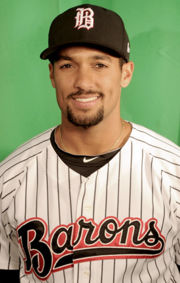 Marcus Andrew Semien (born September 17, 1990 in San Francisco, California) is an infielder for the Chicago White Sox who starred for the 2013 Birmingham Barons at shortstop and second base.

Semien is the son of former college wide receiver Damien Semien. He graduated from St Mary's High School in Berkeley, California where he was a three-time all-league honoree. He followed his father to the University of California, where he majored in sociology. He was an All-PAC 10 shortstop as a sophomore. He was selected by the Chicago White Sox in the 6th round of the 2011 Major League amateur draft and assigned to the Kannapolis Intimidators of the Class A South Atlantic League.

Semien was named the Southern League's Most Valuable Player for 2013. He was promoted to the Triple-A Charlotte Knights on August 1 and made his Major League debut with the White Sox on September 4. He reached with a hit in his first at-bat against former Cy Young winner C. C. Sabathia in Yankee Stadium.