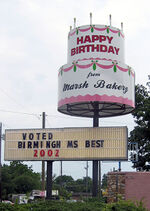 The Marsh Bakery was established by Lloyd and Gail Marsh in the late 1920s as the Floral Park Bakery in eastern Birmingham. In 1932, they renamed their business as Marsh Bakery, which it has remained ever since.

By the 1940s, the family purchased the former Blackburn Building in downtown Birmingham to serve as their primary baking facility. The business would expand, and Marsh baked goods were avaiable in all local Pizitz stores through the 1950s when the downtown facility would close and the familiar location on Highway 11 in southwest Birmingham would open by the 1960s. This location would remain in business through 2005 when the bakery officially moved its operations to Trussville.

Today the business is still run by the Marsh family with Lauren Marsh serving as its leader. The bakery still produces a wide array of cakes and other baked goods including wedding cakes from its Trussville location.