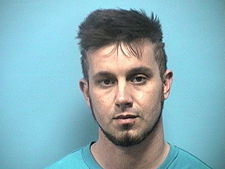 Larry Matthew Pitt (born c. 1984) is a youth evangelist and founder of The Basement.

Pitt, a 2001 gradate of Hewitt-Trussville High School, founded The Basement in 2004 in the basement of his parents' home in Huffman. The ministry grew over the years, meeting at Cathedral of the Cross in Center Point, Church of the Highlands in Irondale, and currently is held monthly at Boutwell Auditorium.

On May 12, 2012, Pitt was arrested in Calera for impersonating a Jefferson County Sheriff's Deputy by flashing blue lights on I-65 in the vehicle he was driving, causing motorists to pull over as he passed. When stopped by a Calera police officer, Pitt reportedly flashed a badge and stated that he was a deputy. He pleaded guilty to that charge and received a 12-month suspended sentence with two years of unsupervised probation.

Pitt was again charged on August 14, 2013 for an incident in which he allegedly impersonated a law-enforcement official the previous June. He was out of town at the time charges were filed, and was expected to turn himself in. Instead, he was arrested after a foot chase near Vulcan Park on August 20, in which Pitt fell from an approximately 45-foot cliff and was injured. On October 15, Shelby County Circuit Judge Dan Reeves revoked his probation on the 2012 charges, and ordered Pitt to serve the remaining 10 months of his one year sentence in jail.

Pitt served eight months and was released from the Shelby County Jail in April 2014. While incarcerated, Pitt ministered to fellow inmates. He was found not guilty of the 2013 charges at trial in April 2015. He currently leads "The Block Party", a weekly youth event at CBF Ministries International at the Roebuck Shopping Center.