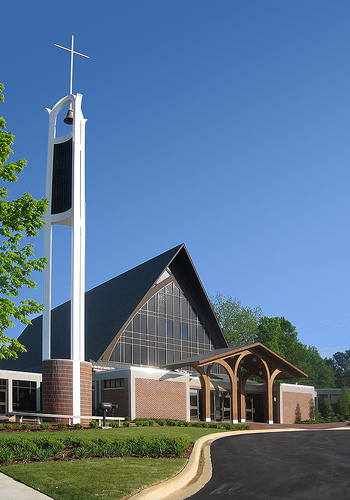 McElwain Baptist Church was a Baptist church which operated from 1895 to 2020 on Montevallo Road in the McElwain community, in what is now Birmingham's Crestline neighborhood.

The church was founded on December 27, 1895 in a wooden building the members had constructed. They hired the area's only ordained minister, W. Y. Browning to preach on the third Sunday of each month, later filling the other weeks on his schedule. Baptisms were held in Shades Creek (or sometimes Blue Hole, under the present site of Eastwood Village).

Prior to erecting their first building, which cost $542.15, several families had been meeting under the shade trees on Euclid Avenue. A plot of land next to the cemetery already donated to the community by J. Daniels Eastis was given by William and Mary Gore for use as a church and school.

The gabled church building was framed and sided with wood from John Thomas Young's sawmill, painted white. An organ was purchased in 1906, but was replaced with a piano in 1915.

Though a previous school had operated in the area, the new McElwain School was organized in 1899 and met at the church until moving to a new structure near the church in 1901. Students sat on buckets, facing the slatted pews which were used as desks. Both church and school has access to outdoor privies. The school was taken over in 1925 by the Jefferson County Board of Education and moved to a nearby site. The old school building was sold to the church, which then sold it to a young couple that moved it up Montevallo Road and, with a new brick exterior, made it into their home.

On April 14, 1929 a new brick church building, built in the same location as the first one, was dedicated. The new building, which cost $10,000, had ten rooms, and an indoor baptistry. Another four rooms were added in 1949, and an education building was constructed only three years later. As soon as the ribbon was cut, the church was already mulling a new church campus to house its rapidly-growing membership.

The present church site, at 4445 Montevallo Road, across from the older church, was donated by Ed Baker in 1955. A fellowship hall, nursery, and classroom buildings were constructed. The fellowship hall, which also served as a temporary sanctuary, was the first to open, on August 18, 1957. Ten years later, on January 8, 1967, the first service was held in the new sanctuary. In 1982 the former sanctuary was restored and made into a "deaf chapel".

McElwain operated a McElwain Child Development Center preschool, which expanded with the addition of a 5K kindergarten class in 2007.

In 2020 the shrinking congregation accepted a proposal to become a satellite campus of Shades Mountain Baptist Church in Vestavia Hills. The new church was named Hope Community Church.