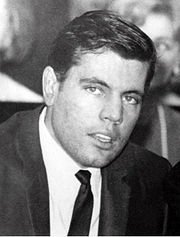 Melvin Lane Powers (born 1942 in Birmingham; died October 8, 2010 in Houston, Texas) was a real estate investor and confidence artist who was acquitted of killing the husband of his aunt and lover in a widely-publicized 1966 trial.

Melvin was the son of Garrett ("Ace") and Elizabeth Weatherby Powers of Birmingham. He served in the U. S. Navy, then took a series of jobs, starting with magazine subscription sales. He was convicted of swindling in Pontiac, Michigan and sentenced to 90 days in jail. In 1961, still on probation, he moved to Houston, Texas and contacted his mother's sister, Candace Mossler, whose husband, Jacques, owned a number of businesses. He shared their 28-room River Oaks mansion with six children from previous marriages and four who were adopted by Mossler after their mother was murdered by their father. Mel was also given a job at the Allen Parker Company.

Powers and Mossler became lovers in 1962 while Jacques spent time in Europe and Florida to overcome a respiratory infection. Jacques learned of their relationship in 1963 from household staff and by reading her diary. He had Powers fired from his job and threw him out of the house, then separated himself from his wife by moving away, settling at the Governors Lodge Apartments in Key Biscayne, Florida. A divorce would have cost him half of his assets, and he wished to avoid the publicity of a lawsuit. Powers railed against his uncle and vowed to return as master of the mansion.

After the separation, Candace provided Powers with starting capital for a mobile home business. Employees there later testified that they had heard Powers make threats against Mossler's life. Candace and the children went to Florida to visit him in the Summer of 1964. While there, she complained of migraines and thrice checked herself in for treatment at Jackson Memorial Hospital. Returning from the hospital on June 30, she found her husband, bludgeoned and stabbed to death, and rolled in a blanket. Powers was arrested days later and he and Candace were later both charged with conspiring to commit murder in order to claim his $33 million estate. The trial began on January 17, 1966. Due to the nature of the crime, the judge barred spectators under the age of 21.

Prosecutors used photographs and testimony to establish that Powers and Candy Mossler were incestuous lovers motivated by greed and resentment. Mossler's diary revealed his mortal fear of the couple. Witnesses and airline records indicated that Powers had made a brief visit to Miami on the night of the murder. Fingerprints and blood stain evidence tied both Powers and Mossler to a rented car that had been spotted leaving the crime scene and was left at the airport. Traces of blood were found on clothing found at Powers' home. Attorneys for the defense, led by Percy Foreman, argued that Mossler was instead killed by a jealous male lover and ultimately convinced the all-male jury to disregard the evidence against his clients. A verdict of not guilty was returned on Sunday March 6, after four days of deliberations.

Powers and his aunt were acquitted and no other persons were ever charged with the murder. They left the courthouse in a gold Cadillac and lived together for a few years at Mossler's Houston mansion before separating. Candace Mossler married Barnett Garrison. Her second husband was badly injured in a fall from their balcony and divorced her before her death from an overdose of prescription drugs at Miami's Fontainebleau Hotel in 1976.

During Houston's oil boom, Powers built his share of the inheritance into a fortune worth as much as $200 million in 1979, with the 20-story Arena Towers, completed in 1981, as his largest development. His fortune dwindled even more quickly. He filed for bankruptcy in 1986, and successfully argued that the towers, which included his penthouse residence, were a "protected homestead", immune from seizure by creditors. Over the next 25 years he successfully returned to wealth through residential real-estate and construction investments.

Powers was found dead at his Houston home in October 2010.