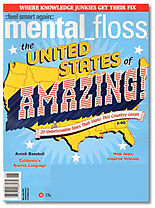 Mental Floss (or mental_floss) is a monthly trivia magazine published in Birmingham for London's Dennis Publishing. It was founded in 2000 as Campus Edition by Will Pearson and Mangesh Hattikudur, then students at Duke University in Durham, North Carolina. The first full-scale newsstand issue of mental_floss appeared in May 2001.

Pearson, a Hoover High School graduate brought the publication to Birmingham in 2002. He hired Jerrold Footlick as publisher and Neely Harris as editor-in-chief. The Birmingham office is located at 2829 2nd Avenue South in the Martin Biscuit Building. As the company grew, additional offices were opened in Brooklyn, New York and Chesterland, Ohio.

Lately Mental Floss has added books, t-shirts and board games to its line-up.

The magazine was acquired in 2011 by Dennis, which also publishes Maxim and The Week.