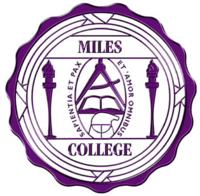 Miles College is a historically black college founded in 1898. Located at 5500 Myron Massey Blvd in Fairfield in western Jefferson County, it is a private liberal arts institution of the Christian Methodist Episcopal Church with 1,501 students enrolled for 2021. The college is a member of the United Negro College Fund and is accredited by the Southern Association of Colleges and Schools. The president is George French Jr. The student newspaper is The Milean.

Miles College is a member of the Deep South Economic Mobility Collaborative which provides funding and support for small business development. In July 2021 Miles College used funds from the CARES Act and Higher Education Emergency Relief Fund to clear $2.1 million in outstanding account balances for currently-enrolled students, and another $1.6 million to provide resources to support students disadvantaged by the COVID-19 pandemic. That fall, the college announced it would also cancel $3.9 million in federally-backed student loans for currently-enrolled students.