Montevallo (Settled in 1815, Incorporated in 1848) is a college town in Shelby County. It serves as the home of the University of Montevallo, a public liberal arts university with around 3,000 students. According to the 2014 census estimate, the population of the city of Montevallo is 6,601.

The location was first settled by Jesse Wilson, who had served under Andrew Jackson in the Creek Indian War. The settlement came to be known as Wilson's Hill after him, and that was the name given the first post office in 1829. When the city was incorporated in 1848, it was given the new pseudo-Italian name "Montevallo" for monte (mountain) and valle (valley).

Montevallo's mayor, elected in 2012, is Hollie Cost. The five-member Montevallo City Council is made up of Rusty Nix, Willie Goldsmith, Don Hughes, Greg Pendelton, and Dee Woodham. The chief of police is Jeremy Littleton.

Montevallo forged an informal sister city relationship with Echizen Town, Japan and made the relationship official during a visit from that city's mayor, council president and economic development director in October 2008. 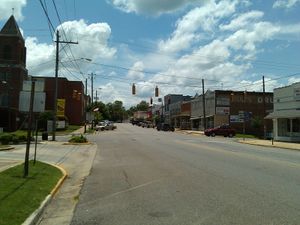 Montevallo is located at the junction of Highway 119 from Alabaster and Highway 25 from Harpersville.

The racial makeup of the city was 73% White and 26% Black. 1.6% of the population were Hispanic or Latino of any race.

There were 1,711 households out of which 25.6% had children under the age of 18 living with them, 37.4% were married couples living together, 15.1% had a female householder with no husband present, and 44.7% were non-families. 30.6% of all households were made up of individuals and 9.9% had someone living alone who was 65 years of age or older. The average household size was 2.30 and the average family size was 2.96.