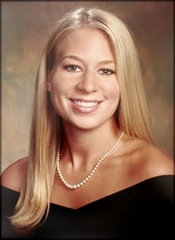 Natalee Ann Holloway (born October 21, 1986; died c. 2005 in Oranjestad, Aruba) is a Mountain Brook teenager who disappeared on May 30, 2005 during a group vacation in in Aruba. She remains missing, and, according to Aruban authorities, is unlikely to be alive. Her disappearance, and later the investigation itself, caused a media sensation in the United States.

Holloway and 124 fellow graduates of Mountain Brook High School were visiting Aruba on an unofficial five-day graduation trip. Natalee was seen leaving Carlos’n Charlie’s, a popular tourist nightspot in Oranjestad, at about 1:30 a.m. on Monday, May 30 with Joran van der Sloot (17) and two companions, Deepak (21) and Satish Kalpoe (18), in Deepak's car.

Natalee did not arrive for her return flight that morning, nor did she appear in any security camera footage of the hotel lobby in the course of the night. Her passport, packed luggage, and mobile phone were found in her hotel room. Holloway's parents, Jug and Beth Twitty flew immediately to Aruba on a jet loaned by McWane Inc. and began canvassing neighborhoods and questioning people who had seen their daughter. Searches of the island and surrounding waters began immediately, but have been fruitless to date.

In March 2006, Gerold Dompig, then-deputy chief of police in Aruba, stated that he believes Holloway probably died from alcohol and/or drug poisoning and was not murdered, and that someone later hid her body.

Natalee's behavior on the night of her disappearance, and the behavior of the group as a whole during the trip, has gained recent attention, notably in a Vanity Fair feature. Joran's statements depict Natalee as drinking heavily and acting promiscuously at the bar before the group left. Dompig has alluded to testimony from others that confirm that she had been drinking heavily during the trip, and revealed that there was some evidence of possible drug use, as well.

An extensive and far-reaching search began immediately. Family and friends of Holloway printed posters and distributed them all over the island, asking everyone they met for leads.

The reward for information leading to Natalee's safe return, pledged by her family, private donors, the Aruban government, and Carlos 'n Charlie's Restaurant, has reached $1,000,000. A $250,000 reward is also offered for information about her whereabouts, alive or dead.

On July 4, the Netherlands dispatched three F-16 fighters equipped with infrared sensors to scan the surrounding waters, but to no avail.

Between July 27-30 a pond near the Aruba Racquet Club was drained on a tip from a gardener who said he saw the three main suspects sitting in a parked car nearby between 2:30 and 3:00 AM.

A landfill was searched several times betwen July and October on the report of a jogger who claimed to have seen Joran, Paulus and Deepak burying a nude, blonde-haired woman there.

Between January and April 2006 the sand dunes on the northwest coast of the island were searched extensively.

Shortly after their arrival, the Twittys discovered that Joran Van der Sloot was the last person seen with their daughter and took that information to the Aruban police. As searches and canvassing of the island proceeded, the police, led by investigator Jan van der Straaten, interviewed Van der Sloot and his friends at his home.

In the Aruban judicial system, which is based on Dutch law, suspects can be detained without charges, but their arrest must be reviewed by a Judge commissioner after a certain period. Evidence is usually not made public without an explicit investigative purpose.

Van der Sloot and the Kalpoe brothers told investigators initially that they had gone with Holloway to the "California Lighthouse" area of Arashi Beach for a short while, and then returned her to her hotel. They said that she fell to the ground after getting out of the car, but refused help. They also said she was approached by two men wearing dark-colored security guard uniforms as they drove away. Suspicion fell on two former security guards at a nearby hotel, Antonius "Mickey" John (30) and Abraham Jones (28). The two suspects were taken into custody on June 5, but were found not to have been involved and were released on June 13.

On June 9, Joran van der Sloot and Deepak and Satish Kalpoe were arrested as suspects based on inconsistencies in their stories. According to statements by John after his release, Deepak apologized to him in jail for lying about the security guards.

On June 17 a fourth suspect, Steve Gregory Croes (26), a party-boat disc jockey, was placed in custody. On June 22, Joran's father, Paulus van der Sloot, an official in the Aruban courts, was also detained for questioning and then arrested. He waived his right not to testify against his son and was released on June 26. Croes was released the next day. The Kalpoes were released on July 4, but re-arrested on August 26, along with another friend of Joran's, Freddy Arambatzis.

The recent story that has emerged from the suspects is that the Kalpoes left Holloway and Van der Sloot alone at a beach near the Marriott Hotel at 1:40 A.M. Joran says that he told Holloway that he needed to return home because he had classes the next morning, but she did not want to leave the beach. He says he called Satish for a ride and was taken home around 3:00 A.M. Interviewed separately, Satish denied having picked up Joran from the beach.

On September 3 all four suspects were released from custody but required to remain in Aruba and available for further questioning. These restrictions were lifted on September 14 by a Court of Appeals. Furthermore, Paulus van der Sloot filed a successful complaint for unjust detention and is no longer legally a suspect. He will likely be entitled to damages from the Aruban government. Joran has begun attending college in the Netherlands.

On April 15, 2006 a new suspect, Geoffrey van Cromvoirt, a reputed drug dealer, was placed in custody. He was released on April 24, following the arrest of another individual, identified as "A.B." who was picked up, questioned, and released on April 22.

Since the first weeks of the criminal investigation the Twittys have charged that the Aruban police have been ineffective. Their involvement, particularly Beth's, in pursuing an independent investigation and criticizing the government has caused friction with Aruban authorities.

Based on a videotaped interview, the authenticity of which has been questioned, and documents, which have not been made public, Twitty has said she has no doubt that Joran, Deepak and Satish all participated in raping Natalee at the Van der Sloot home. Aruban police have denied that any such statements were made by the suspects.

Later statements by critics of the Aruban investigation have alleged a cover-up to protect Van der Sloot, the son of a government official. Counter-criticisms of interference have been levelled against the Twittys for supposedly suppressing testimony from her classmates, especially anything that would call Natalee's behaviour into question. Beth Twitty has been a frequent guest on television news and talk shows and has therefore enjoyed a platform to express her opinions of the case.

In an attempt to pressure the government of Aruba to solve the case, the Twittys and their supporters have called for a tourist boycott of the island. Aruban officials have responded that much of the criticism comes from ignorance of the criminal justice procedure used in the Kingdom of the Netherlands.

These calls received support from many media commentators and judicial advocacy organizations. On November 8, Governor Bob Riley went on record supporting the boycott and wrote other governors to join him. The City Council of Philadelphia did pass a boycott resolution. The U. S. State Department expressly denied supporting any official boycott of Aruba.

Meanwhile various organizations representing Aruba's tourism industry, by far the leading segment of the island's economy, formed a group called the "Strategic Communications Task Force" to coordinate their response and provide what they consider a fairer portrayal of Aruba. Their weblog, "Aruba Truth", issues press releases in response to developments in the case.

After Van der Straaten's retirement, Police Commissioner Gerold Dompig took over as the leader of the investigation. In April 2006 he was replaced by Adolpho (Dolfi) Richardson.

U.S. television networks have devoted much air time to the search for Natalee, the investigation of her disappearance, and rumors surrounding the case; Greta Van Susteren, host of FOX News' On the Record, perhaps most prominently. The extensive daily coverage was eclipsed by reporting on Hurricane Katrina and its aftermath.

Locally, the Aruban Press has published extensively on the disappearance and search. The story generated only mild interest in the Netherlands.

The saturation of coverage in the U.S. triggered a backlash among some critics who allude to the media's supposed "missing white woman syndrome". CNN ran a segment criticizing the amount of coverage their competitors have been giving to the story.

Several TV series have aired episodes based to some extent on the Natalee Holloway case:

In 2007 HarperOne published an account of the case penned by Natalee's mother, Beth. The Lifetime cable network is producing a 2009 TV movie based on her book, starring Amy Gumenick as Natalee and Tracy Pollan as Beth Holloway-Twitty.