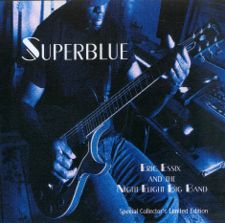 Cover of the CD, "Superblue" by Eric Essix and the Night Flight Big Band

The NFBB was featured on the Oasis Stage at City Stages in 2007, and the Preserve Jazz Festival in 2008. Notable members of this group include Gary Wheat, Robert Dickson, Sonny Harris, Bo Berry, Steve Ramos and Ray Reach.