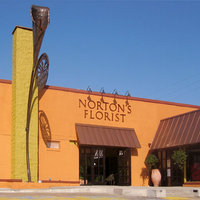 Norton's Florist is Birmingham's largest full-service florist, established in 1921 with four locations in town. The main location is at 401 22nd Street South in a building formerly occupied by Chip Ellis Motorcars. It was recently relocated from 7th Avenue South in Lakeview. Other locations are at Inverness Landing, Church Street in Mountain Brook, and the AmSouth Harbert Plaza. Norton's is owned by Gus Pappas.