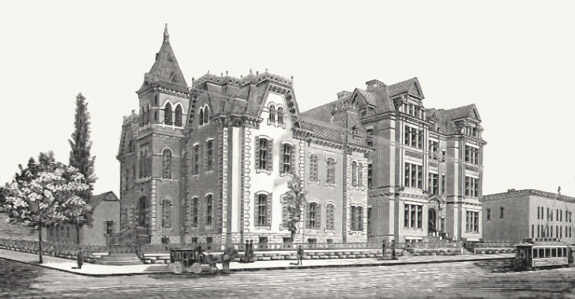 Illustration of the Paul Hayne School in an 1893 publication

The Paul Hayne School or Paul Hayne Opportunity High School (originally Southside Grammar School) was a former Birmingham city school located on the southeast corner of 5th Avenue South and 20th Street (on the present site of the Kirklin Clinic). It was constructed in 1886 at a cost of $60,000 and later expanded. 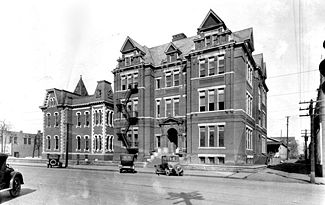 The school was named in honor of South Carolina-born poet Paul Hamilton Hayne, who sent an original poem and a book of verse in honor of the school at its dedication.

The original school was three stories with a basement and the upper floor sheltered under a mansard roof. The exterior was clad in light-colored brick with limestone quoins at the corners and segmental arches over the windows. A central entrance tower faced 5th Avenue and was peaked with a tall pyramidal roof spire. The other roofs were of slate with clipped gables and a wrought-iron parapet rail.

An 1889 addition to the south side of the building faced 20th Street. It housed 12 classrooms on three stories, with an attic floor enclosed in a multi-gabled roof. The newer building, designed by the firm of Wheelock, Joy and Wheelock and built at a cost of $50,000, was clad in a darker brick and had a more understated ornamental scheme with triple windows and projecting courses. 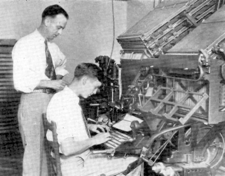 Instruction on a linotype machine in 1930. courtesy BPL Archives

By 1953, the school was no longer in use, allowing students displaced by a fire at Edgewood Elementary School to be bused there while the damaged portion of their school was rebuilt.