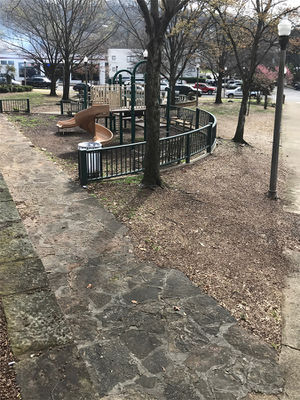 Phelan Park is a small neighborhood park located in the Five Points South neighborhood between 13th and 14th Avenue South at 15th Street. The park was established in 1907 and named for pioneer homesteader Ellis Phelan, one of the first to take up residence in the area surrounding what became Five Points South.

In the 1930s the Works Progress Administration undertook to improve the informal park, building rock wall around its edges.

The neighborhood around the park declined in the 1980s and the park itself was frequented by prostitutes and drug users. Neighbors referred to it disparagingly as "Felon Park" or "Needle Park". An early 1990s clean-up effort was largely successful, helped by neighborhood leaders who convinced Tuscaloosa's Dreamland Bar-B-Que to open their first and only Birmingham location in a vacant commercial building facing the park. The city and the neighborhood association spent a total of about $330,000 in park improvements including playground equipment and sidewalk lighting. Part of the money was donated by HealthSouth. A. G. Gaston Construction was contracted to do the landscaping work, and a number of recovering substance abusers from the Fellowship House, a nearby halfway house, were hired to help with the work.

The triangular park now contains a small playground area and a paved plaza with picnic tables, located directly across from Dreamland. The park is the centerpiece of the Phelan Park Historic District, As recorded in the National Register of Historic Places on February 26, 1989, the historic district is bounded by 13th Avenue South, 14th Street South, 14th Avenue South, and 13th Place South. In January 1994 the district became the first local historic district recognized by the city of Birmingham. That same year the Five Points South neighborhood association, together with the city and the Magic City Blues Society, began sponsoring blues concerts, the Phelan Park Music Series. on Sunday afternoons each Spring and Fall.

In 2003 the neighborhood successfully petitioned the city to institute a curfew at Phelan Park. Posted signs indicate the park is open from 6:00 AM to 10:00 PM.